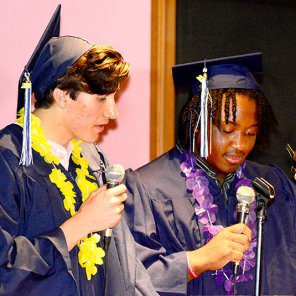 The strains of Elgar’s Pomp and Circumstance March No. 1 and the navy-blue caps and gowns said graduation, but the luau-themed decorations and the slight roll of the ship said cruise. Thirty-five Classical Conversations graduates participated in CC’s third-annual Capstone Cruise Commencement May 2 on board the Carnival cruise ship Liberty.

Three hundred-fifty people—CC students, parents and staff—joined in the five-day Capstone Cruise to the Bahamas, April 29-May 3, which featured the commencement and the national championships in National Memory Master and National Number Knockout.

Scott Whitaker, CC director of New Initiatives, gave the welcome to the large group, as well as the benediction.

A senior ensemble made up of graduates Delaney Bright, Katelyn Bunch, Matthew Carpenter, Michelle DuCote, Michael Keller, Lucita Piotrowicz, Kyle Schuman, and Chloe Thames led the audience in singing “Your Grace is Enough,” “Be Thou My Vision,” and “In Christ Alone.”

CC founder and Chief Visionary Officer Leigh Bortins told the graduates how their parents stood up against the status quo and peer pressure in order to homeschool them, so they should honor and respect their parents. She challenged them to continue the fight against mediocrity and the culture around them.