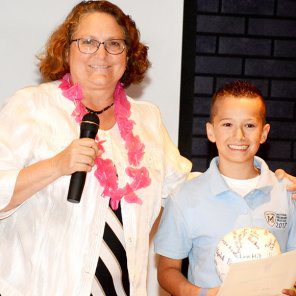 Jackson was one of 16 finalists in the National Memory Master competition held May 1 during a five-day cruise to the Bahamas aboard the Carnival cruise ship Liberty. Twelve 10-12-year-olds remained after the first round of completion, and six remained after the second round. Finally, after a third and final round and almost eight hours of grueling recitations, Jackson was the sole competitor left standing.

“I can’t believe I won!” Jackson said immediately after the competition. “It was a lot of work, but I’m so glad I did all that hard work; it was definitely worth it! I had a blast on the cruise, and I’m glad I got to meet a lot of new friends.” Jackson plans to put his winnings into his college fund.

Jackson is the son of Matt and Marcia Ford and the oldest of five children. He is finishing his fifth year as a CC student and has been a Memory Master all five years. He will be entering CC’s Challenge program for young adults in the fall.