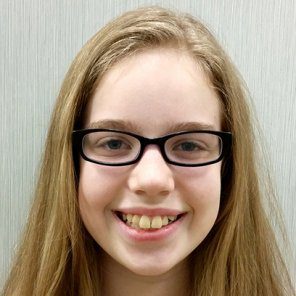 Champaign, IL—A Champaign sixth-grader will embark Sunday on a voyage to become a national memory champion and earn a $10,000 grand prize.

Claire Vivian, 11, of Champaign, is one of 16 finalists in the National Memory Master competition. On May 2 Claire will compete in three rounds of academic memory testing during a five-day cruise to the Bahamas aboard the Carnival cruise ship Victory. Each of the finalists received two free tickets to the cruise and $800 in traveling money.

The 16 finalists have already been through a rigorous series of local and regional competitions to reach the finals. Claire’s presentation to reach this point in the competition was a history story presented as a museum curator in the Lauren Rogers Museum of Art, where she recited all 12 history facts in under 180 seconds.

“After setting this goal for myself, it was exciting to be named a finalist for National Memory Master,” Claire said.