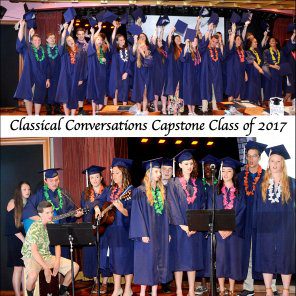 More than 320 people—CC students, parents and staff—joined in the five-day Capstone Cruise to the Bahamas, April 30-May 4, which featured the graduation ceremony and the national championships in National Memory Master and National Number Knockout.

Scott Whitaker, director of New Initiatives for CC and coordinator of the cruise and graduation, served as master of ceremonies, and Keith Denton, CC chief operations officer and father of one of the graduates, gave the Invocation.

A senior ensemble made up of most of the graduates sang “In Christ Alone.”

CC founder Leigh Bortins introduced three graduates who gave speeches on the theme of “Honoring Your Father and Your Mother.” Emery Foster gave a humorous speech, Josiah Haller read John 1:1-7 in English and in Latin, and Maddie Pierce gave an inspirational speech.

In case you are wondering, CC is already planning its 3rd-annual Capstone Cruise for April 29-May 3. Check the following website for updates over the next several months: classicalconversations.com/capstonecruise.

Classical Conversations® is a classical education resource used by homeschoolers in all 50 states and 15 foreign countries. CC now has more than 105,000 students enrolled in its tutoring programs, which are provided by almost 2,500 CC communities. CC provides resources, guidance and a community for a Christian home school curriculum using classical education in three developmental stages: grammar, dialectic and rhetoric.

In one of the most famous allegories of all time, the ancient Greek philosopher Plato...