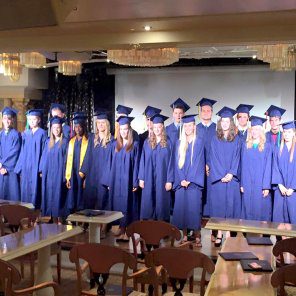 21 Classical Conversations students received their high school diplomas this afternoon during a first of its kind CC graduation on board the Carnival cruise ship Victory.

Keith Denton, CC chief operations officer, gave the welcome to the large group, as well as the benediction.

A senior ensemble made up of graduates Hannah Bos, Sierra Bromen, Matthew Heinrich and Olivia Simons led the audience in singing, “Great is Thy Faithfulness,” and “Come Thou Fount.”

Classical Conversations® is a classical education resource used by homeschoolers in all 50 states and 14 foreign countries. CC now has more than 93,000 students enrolled in its tutoring programs, which are provided by almost 1,900 CC communities. CC provides resources, guidance and a community for a Christian home school curriculum using classical education in three developmental stages: grammar, dialectic and rhetoric.