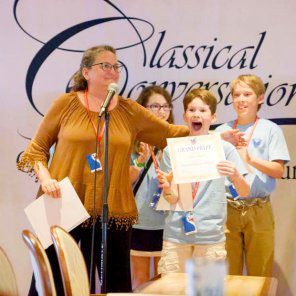 Fishers, Indiana—Tobin Seiple is just 11, but his ability to memorize facts is amazing. So amazing, in fact, that the Fishers student won a national memory championship and a $10,000 cash prize April 30.

The gregarious sixth-grader was one of 16 finalists in the National Memory Master competition held April 30 during a five-day cruise to the Bahamas aboard the Carnival cruise ship Liberty. Twelve 10-12-year-olds remained after the first round of competition, and six remained after the second. Finally, after a third and final round and six hours of grueling recitations, Tobin was the sole competitor left standing.

“I am excited and thankful that I won the National Memory Master competition!” Tobin said. “I could not have done it without the love and strength of God to get me through the difficult days and the support and encouragement of my family. My favorite aspect was competing alongside such amazing finalists and becoming friends with all of them.”

From his winnings Tobin plans to invest $8,000 in an IRA, give $1,000 to his church and buy an iPod. But his planning didn’t stop there: he also plans to take his fellow CC classmates and friends on a movie outing to see Endgame and give a meaningful gift to his fellow NMM finalists.

Tobin enjoys playing tennis, golf, and pickle ball. He loves to travel to see new places, and Australia, Niagara Falls, and Cozumel are among his favorite so far. He is a natural performer and loves presenting, singing, playing the piano, and acting. He is really excited because he just started breakdancing classes. He enjoys serving others, and some of his favorite service opportunities have been helping at a local food pantry and serving dinner at a men’s shelter.

He was accompanied on the cruise by his parents, sister and brother, and grandparents.

The 16 finalists had to survive a rigorous series of local and regional competitions to reach the finals. They were tested on more than 500 facts in their local community and memorized more than 1,200 facts for the finals. Each of the finalists received two free tickets to the cruise and $800 in traveling money.

Started in 1997 and headquartered in Southern Pines, North Carolina, CC is a family-owned company that provides services to 2,500 CC communities around the world. For more information visit www.classicalconversations.com.