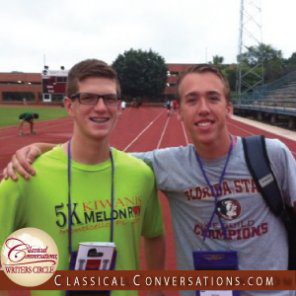 This summer a friend and I were blessed with the privilege of representing Classical Conversations at the National Latin Forum in San Antonio, Texas. Our participation marked the first time that Classical Conversations students took part in the forum. I am sure it will not be the last. I would like to share with you some of the steps on my journey to the National Latin Forum and encourage other parents and directors to provide similar opportunities for their students.

My Classical Conversations community opened our Junior Classical League chapter five years ago. Each year since our founding, our community members have attended the regional forum, and in 2014 we were thrilled to qualify for and attend our first state forum. Contestants at the state forum take two academic tests covering a wide variety of classical subjects which perfectly intersect with material we have learned through our Classical Conversations classes. They also participate in Olympic-style events and even a Latin and Roman culture bowl called Certamen (contest).

As this year’s state forum approached, I felt compelled to push myself even further; I wanted to try out for Florida’s national Certamen team. It was not going to be easy. Florida has been a Certamen powerhouse for more than two decades, and ranks number two for championships in the nation.  I knew that the odds of landing a spot on the national team were not in my favor. After all, I thought, I am from a small homeschool group, and I will be vying against kids from the many private and public schools all across Florida. However, after countless hours of studying and three grueling tryouts, I prevailed with the Lord’s help!

After the initial euphoria of my triumph, I settled into studying for nationals. This year I did not have the luxury of a summer break; every available moment was dedicated to Certamen and preparing for the academic tests which I would take there.

Finally, after three months of studying, nationals rolled around and I boarded the charter bus bound for San Antonio with about twenty other nervous and excited students from Tallahassee. The fifteen-hour bus trip was very entertaining and allowed me to get to know fellow Junior Classical League members from neighboring counties. By the time we reached Trinity University, the site of convention, we were all great friends. It was truly amazing to connect with other Latin enthusiasts from across the country.

Over the course of the week-long national tournament, my Certamen team successfully competed in three qualifying matches in order to make the semi-finals where we beat Georgia and Texas by a solid point margin. We were headed to the National Certamen Championship! Less than twenty-four hours later we faced off against Virginia and Massachusetts, who have consistently brought outstanding teams to Certamen over the years. Incredibly, the result came down to the final question! Any team could have taken home the trophy, but sadly Virginia buzzed in only milliseconds faster than Florida and won. However, Florida, with Classical Conversations students helping to represent her, took second place in the National Certamen Championship!

Participants in nationals can choose to take an unlimited number of tests rather than the maximum of two at the state forum. I elected to attempt ten tests, and did very well in most of them thanks to my six years in Classical Conversations. For instance, a month before the convention, I determined to take the classical geography test; however, I couldn’t find appropriate resources online to help me prepare. Because of the skills learned in Challenge A, I was equipped to just go ahead and draw a map of the ancient world for myself! Later, I even submitted my map in the graphic arts contest at nationals and it took fifth place. I am deeply grateful to my Challenge A Director, Mrs. Pittman, for the time she invested in my life to help me develop that ability. I would never have guessed at the time how much I would come to appreciate having been required to draw the world by memory! Additionally, the memorization techniques I was exposed to in Foundations allowed me to swiftly master facts for all of the different tests.

It is my desire that my experience will inspire other Classical Conversations directors and parents to consider starting Junior Classical League chapters in their communities and offering the students in their programs the opportunity to attend their local regional forum. Participating in the Junior Classical League has not only benefited my Latin studies immeasurably, but it has also been a tremendous incentive to pursue my other subjects with diligence as well. If your community joins the Junior Classical League I know that it will change many of your students’ perspectives on Latin and drive them to excel in ways they could never have anticipated. I have witnessed this transformation in our own community.

For more information on starting your own JCL chapter, you may visit the National Junior Classical League website at http://www.njcl.org/. You may also want to visit our chapter’s website: http://tallahasseecclatinclub.weebly.com/. Please feel free to contact us with any questions. Our email can be found on the website. To Mrs. Barnard, our chapter’s sponsor, thank you for all that you have done and continue to do in order to see your students succeed in Latin. Finally, remember always, a Deo lux nostra (our light comes from God)!

Ethan Ream, a seventeen-year-old Challenge II student, has been enrolled as a Classical Conversations student for six years. He originally loved the Latin strand in Challenge A because of his interest in history and old manuscripts, and that love quickly blossomed into a passion as the first semester progressed. He joined the Latin Club the following year. The Latin Club has not only strengthened his appreciation for the classics, but also provided invaluable guidance as he pursues his Latin studies. Ethan lives with his family in Florida. He plans to continue his Latin studies and, Lord willing, intends to major in classics at Florida State University before pursuing law school.