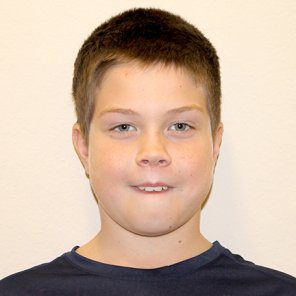 Ludowici, GA—A Ludowici fifth-grader will embark in less than three weeks on a voyage to become a national memory champion and earn a $10,000 grand prize.

Obadiah Nielsen, 10, of Ludowici, near Fort Stewart, Georgia, is one of 16 finalists in the National Memory Master competition. On May 2 Obadiah will compete in three rounds of academic memory testing during a five-day cruise to the Bahamas aboard the Carnival cruise ship Victory. Each of the finalists received two free tickets to the cruise and $800 in traveling money.

“I am very excited to be an NMM finalist,” Obadiah said. “I plan on studying diligently for the competition, but I’m also looking forward to the food and maybe some snorkeling while on the cruise!”

The 16 finalists have already been through a rigorous series of local and regional competitions to reach the finals. Obadiah’s presentation to reach this point focused on the sovereignty of God throughout the Middle Ages.

He enjoys studying history and pursues scientific inquiry independent of school.  This past year he played Little League football.  He spends most of his free time outside but enjoys cooking and reading as well as fixing things for his mother while his father is deployed to Romania with the U.S. Army.  Obadiah is also part of the children’s choir at his church, First Baptist of Ludowici.