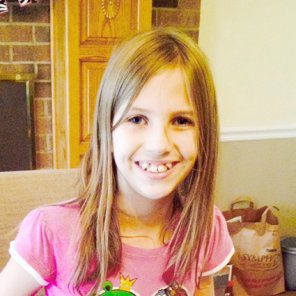 Middletown, OH—A Middletown fifth-grader will embark in less than three weeks on a voyage to become a national memory champion and earn a $10,000 grand prize.

Bailey LaRue, 11, of Middletown, is one of 16 finalists in the National Memory Master competition. On May 2 Bailey will compete in three rounds of academic memory testing during a five-day cruise to the Bahamas aboard the Carnival cruise ship Victory. Each of the finalists received two free tickets to the cruise and $800 in traveling money.

“I know I’m going on a cruise,” Bailey said, “but I still can’t believe I’m a part of a national competition!”

The 16 finalists have already been through a rigorous series of local and regional competitions to reach the finals. Bailey presented a 3-minute historical presentation which included 12 required history references combined into one seamless “news report” using her own creativity in order to qualify for National Memory Master.

Bailey loves math, and also plays basketball and softball competitively, and plays the piano and enjoys reading. She is a member of University Baptist Church in Middletown where her father serves as pastor.