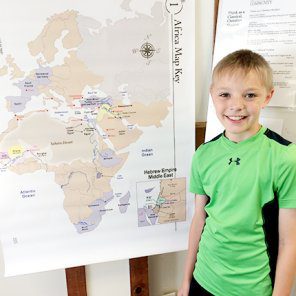 Nashua, NH—A Nashua fifth-grader will embark in less than three weeks on a voyage to become a national memory champion and earn a $10,000 grand prize.

Levi Santoro, 11, of Nashua, is one of 16 finalists in the National Memory Master competition. On May 2 Levi will compete in three rounds of academic memory testing during a five-day cruise to the Bahamas aboard the Carnival cruise ship Victory. Each of the finalists received two free tickets to the cruise and $800 in traveling money.

“I’m excited to be one of the first 16 National Memory Masters finalists EVER,” Levi said, “but I’m sad that my friend Brian [Cole] isn’t going also.”

The 16 finalists have already been through a rigorous series of local and regional competitions to reach the finals. Levi’s presentation to reach this point described how the early Middle Ages fit into the great classical conversations of history.

When he’s not on the soccer field playing for Nashua World Cup, Levi enjoys futsal, snowboarding, skiing, cup-stacking, video games and singing at church. He is looking forward to becoming a certified soccer referee this summer.

Will a Classical Education Get Your Child a Job? (Updated for 2022)