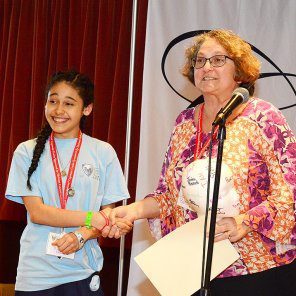 Franklin, Tennessee— Zoe Aviles is just 12, but her ability to memorize facts is amazing. So amazing, in fact, that the Franklin, Tennessee, student won the National Memory Master championship and a $10,000 cash prize April 30.

The effervescent sixth-grader with the infectious smile was one of 16 finalists in the National Memory Master competition held April 30 during a five-day cruise to the Bahamas aboard the Carnival cruise ship Liberty. Twelve 10-12-year-olds remained after the first round of completion, and six remained after the second round. Finally, after a third and final round and six hours of grueling recitations, Zoe was the sole competitor left standing.

“I am incredibly blessed and grateful for God’s faithfulness!” Zoe said upon winning. “I can’t believe I won!”

The 16 finalists had to survive a rigorous series of local and regional competitions to reach the finals. They were tested on more than 500 facts in their local community and memorized more than 1,200 facts for the finals. Each of the finalists received two free tickets to the cruise and $800 in traveling money.

Zoe attends the Classical Conversations community of South Franklin. She is the daughter of Gabriel and Tanya Aviles and has a younger sister and brother. She is finishing her sixth year as a Classical Conversations student and has been a Memory Master for all six years. Zoe says she can’t pick a favorite school subject because she “just adores them all!”  Her hobbies include dance, sewing, crafts, reading and hair-styling. She also helps with the children’s ministry in the Pre-K class at her church.