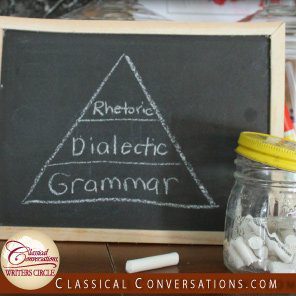 Before homeschooling my children, my educational experience was limited to how I was taught, which I would generally characterize as traditional. I grew up attending a private, Christian school and later graduated from a Bible university with degrees in social work and Bible. I had no experience and very little information regarding classical education. When I attended an information meeting for Classical Conversations, I was just beginning my journey into understanding classical education. The first thing I noticed was that I did not understand the terminology! Whenever a CC representative tried to explain how the program worked, I found myself lost in translation. Maybe you have found yourself in the same predicament? Today I aim to offer definitions for some terms commonly used in classical education. I hope it helps!

Note: I have chosen to organize the terms in order of topic development rather than alphabetically, like a typical glossary.

Grammar: In classical education, grammar is the vocabulary of all subjects. While we often consign grammar to languages only—English, Latin, Spanish, and so on—grammar is actually the language of each subject—science, math, music, and more. Children age four through twelve (kindergarten through fourth grade, more or less), learn facts. They memorize and recite information that will serve as “memory pegs” as they continue to move through the stages of learning. Generally, children at this age enjoy and are successful learning through observation and memory, because this method of learning meets them in their natural stage of development. They are gatherers of information. You can find examples of this in your own home, right? Children can hear a song once and know all the words or “read” their favorite book to you perfectly before they know the letters. It is a delight! Grammar is both a developmental stage and a method of learning.

Dialectic: Also known as the logic stage, dialectic is also both a developmental stage and a method of learning. Generally applied to children in grades fifth through eighth or ages twelve through fourteen, it is when children begin to look for connections between facts and subjects. While they might have expressed passing interest in “why” during the grammar stage, the dialectic stage is consumed by it. In “The Lost Tools of Learning,”[i] Dorothy Sayers suggests disciplining their “natural argumentativeness” to good purpose rather than allowing it to “run away into the sands.” I have to say, I remember this stage quite well. I can recall picking many a “fight” with my parents, not necessarily because I disagreed with them, but because I enjoyed the intellectual exercise of a good debate. I am not quite sure they saw it the same way! The memory pegs of the grammar stage will come in very handy as children use that information to make connections.

Rhetoric: Children typically hit the rhetoric stage in high school (age fourteen through eighteen). Because they have been so well prepared in the grammar stage to gather information and in the dialectic stage to make connections between the information, they are able to focus on the beauty of expressing both their written and spoken thoughts well.

Students spend time immersed in topics which interest them by applying the techniques of learning they have spent years acquiring. At this point, they are well on their way to lifelong, independent learning. I remember when I first started reading significant books that my parents had not yet read and feeling very grown up to have something to share with them. One such, Till We Have Faces by C.S. Lewis, still sticks with me.

Trivium: The stages of learning—grammar, dialectic, and rhetoric—are the three stages of the trivium. They are both developmental stages and teaching methods. As you can see in the definitions above, they build on each other. Even as an adult learning something new, you will find yourself progressing through these three stages of learning. You are likely to progress through the stages more quickly (in days, weeks, or months rather than years), but you will move through these stages nonetheless.

Classical education capitalizes on the stages of learning to teach in the method most developmentally appropriate. Since a grammar stage child is free to memorize during the grammar stage, they are not inhibited by also trying to make connections, which they are most likely not prepared to make. During the dialectic stage their energies can be spent on making connections, which they love, rather than memorizing facts which are much less appealing to them now. But, they also benefit from having learned how to memorize when younger so they are prepared to do so more easily when necessary. Compiling their thoughts into strong, concise arguments during the rhetoric stage is more artfully accomplished because of the foundational skills acquired during the grammar and dialectic stage. Each stage builds on the previous one(s).

No conversation about classical education would be complete without discussing the strong emphasis placed on language. This emphasis on language is what leads classical educators to teach Latin. Understanding Latin provides insight into not only the English language, but also technical languages. Rather than characterizing it as a “dead language,” I would classify it as a foundational language. This emphasis on language also leads to an emphasis on classic literature, as classical educators seek to expose students to the best the literary world has to offer. Lest you think this is limited to only novels, there is much classic literature to be found on topics of science, math, geography, and more.

I plan to write a second post offering details on how a classical, Christian education distinguishes itself even more than a classical, humanistic education. I will also speak more to how this is applied in Classical Conversations. Please speak up and let me know if you have any questions or concerns about how I have explained these terms! I am excited daily about what I am learning about classical education and I would love to discuss it more with you!

[i] Reprinted in Classical Christian Education Made Approachable