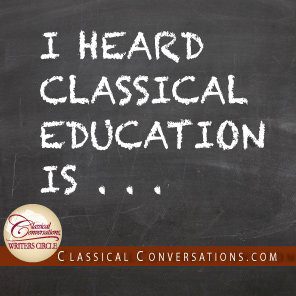 Many classical educators, writers, and homeschool parents have associated classical education with the chronological study of history or literature. Sadly, this limits what is involved in a classical education. Instead, we want to train our students in the skills that will enable them to approach all subjects.

This Lenten season, my children and I have been reading through the book of Matthew. We have paused several times to ponder the richness of the language and what it means. What did Jesus mean when He said that the “ax was already at the root of the trees?” How does this compare to the metaphor of Scripture as a “two-edged sword?” Discussing this imagery has us call into question some contemporary feel-good Gospel messages. God’s Word is powerful and sometimes divisive. Understanding language helps us to see differently.

What does it mean that we are the “salt of the earth?” My children came up with several uses for salt, including flavor and preservation. Are we a wonderful flavor to those around us? Are we preserving the lives of those around us?

If we focus our children on language—first through phonics, handwriting, , and spelling, later through parsing, diagramming, composition, and speaking—then we have prepared them to know God’s Word and to share it with others.

At the same time, we can help our students to know God by helping them know His world. We study the language of His world when we teach children mathematics for it is the language of creation. Many modern scientists have cheated our children and us by causing us to believe in the myth of the separation of science and the church. Nothing could be farther from the truth. The modern scientific method depends upon predictability. If you drop a ball from the roof of your house 1,000 times, you should get roughly the same result. This predictability depends upon an orderly universe, allowing us to make predictions and formulate laws. The predictability depends upon a stable system sustained by the Creator.

In Nancy Pearcey’s book The Soul of Science, she relates how Kepler worried over his model of planetary motion because there were eight missing minutes for the orbit of Mars. I do not know about you, but, in the grand scope of the universe, eight minutes does not seem like much. I might be willing to overlook it, but Kepler was not, because he began his scientific investigations with the bedrock assurance that God is a God of order. He had to find those eight minutes. Thus, he changed his model from circular orbits to elliptical ones.

We, too, can train our children to know His world by training them to carefully read, research, record, and relate. These same skills apply to history, literature, and foreign language. We teach them to study God’s Word and His world well by carefully observing what they see or read, researching what others have learned, recording their thoughts, and relating their findings to others.

Modern education often turns things upside down. They wait until students are in high school, tell them to memorize the reproductive systems of plants, and then quiz them on the parts. Instead, I want my Challenge students to see that memorizing the parts is just the beginning. They must be able to name the parts so that they can know the system. They must know the system so that they can think about the universals. The point of studying the reproductive system of plants is to think about the meaning of life. Is it right to define living creatures as things which can reproduce themselves? What is the difference between plant life, animal life, and human life?

The same is true in mathematics. Last week, we studied functions. The students were given two functions and asked to demonstrate whether or not they were inverse functions by plugging in variables like 1/x-1. One student asked the question, “When are we ever going to use this in real life?” Before I could respond, another student quipped, “What do you mean, isn’t this real life right now?” Yes! Then, we were able to talk about how the act of analyzing these abstract functions makes us more human in the pure sense of God’s intentions for us. We can think about abstract functions and manipulate variables because we are created in His image. If we delight in the things that mark us as being created in His image, then we belong to Him more and more. As C.S. Lewis says, “If once they get through this initial dryness successfully, they become much less dependent on emotion and therefore much harder to tempt.” (Screwtape Letters)

Rather than focusing too narrowly, a classical education teaches students to:

Let us rejoice in Him and His marvelous gifts!