English to Latin… The Most Rhetorical Assignments 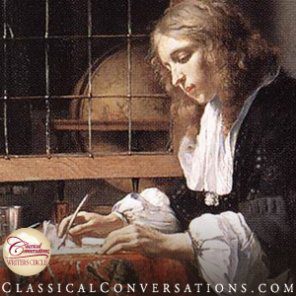 When you think about the trivium in any subject, the rhetorical level is the level in which you should show the most mastery of the subject. Latin is no exception. During the grammar stage of Latin you memorize the endings and the vocabulary. The dialectic stage focuses on Latin to English sentences and parsing; you apply what you learned in the grammar stage. Finally, in the rhetorical stage you will utilize both the grammar and the dialectic to create your own Latin sentences. An interesting facet of Latin is that in each lesson, you will utilize skills of each of these three stages. Chapters will start with the grammar and usually end with the rhetoric (I like the way Henle has several little lessons within each lesson). I thought, in the interest of those of you in the Latin trenches out there, that I would show you how I would work through an English to Latin assignment. I chose Exercise 14 because most of you have probably done it recently or are getting ready to do it (I was discussing it with fellow community members). Also, I noticed that there are some discrepancies between the answer key and the word order I would use (remember, please give yourselves some grace when it comes to word order and macrons—the important thing is that the words are spelled correctly).

1. Christians praise the Son of Mary. This is English to Latin, so we will use Victorious Nancy Verily Ate Elves (Vocabulary, Nominative/Subject, Verb, Accusative, Everything Else).

1. Vocabulary ( (if your students do not have the few words from Lessons 1 and 2 memorized well for this exercise, make sure they go back and restudy very thoroughly).
2. Nominative/Subject: Christians are doing the praising and they are second declension masculine and here plural, so we can put Christianī in the front of the sentence.
3. Verb: They are doing the action, so we know our verb is going to end in –nt. Our verb then is laudant and should be put at the end of the sentence.
4. Accusative/Direct Object: Son is the direct object because, thankfully, Jesus is being praised. Filius is second declension and is singular—Filium (capitalized). We have translated Christians, praise, Son.
5. Everything Else: We do not need to translate “the” because Latin does not have articles. What about “of Mary”? In English, “of Mary” is a prepositional phrase. In Latin, however, it shows possession and is translated by the genitive. Genitive usually follows what it possesses. Mary is first declension and the genitive is Mariae.
6. Final sentence: Christianī Filium Mariae laudant.
Give yourself grace on word order and macrons.

Remember, we have an order in which we approach this. This is hard, but we can do it!

Vocabulary: (we know them because we practiced!)

Nominative: Mary is Maria and is nominative singular. Put her name in the front of the sentence.

Verb: She is singular and so the verb going with her ends with a –t. Right now, we know videt means “he, she, it sees.” Later on, we shall be expected to know that it is second conjugation and that it needs an e between its stem and ending.

Accusative/Direct Object: Now, we have to add our direct object and our phrase “of God.” We have Son again just like in the first sentence and it is still the direct object.

Everything Else: “0f God” is possessive and is second declension, Deus, Dei.

3. Christians praise the victory of Christ.

We have Christians praise again so, Christiani ______laudant. “Victory” is the direct object and is victoriam. The victory is Christ’s, thus the genitive “of Christ” is second declension genitive Christi.

9. The sailors do not praise the victory of the slaves.

Here, the only difference is that we have an adverb. Now, when you have an adverb such as “not” with a verb, you cannot use the simple form of the English verb. Please remember that laudant means “they praise, they do praise, and they are praising.” What words can we ignore while translating? “They” and “do” can be ignored. Also, we technically will not have a word for “of” because it is implied in the genitive case.

Victorious—Vocabulary: yes, we know it (if your student does not know the limited vocabulary at this time, make sure he/she reviews it thoroughly).

Elves—Everything Else: not: non; of slaves: servorum.

Remember, this is the hardest thing to do in Latin, so give yourselves and your students a lot of grace! As long as you systematically work on each sentence, it is not insurmountable. You can do it!

As mentioned above, this lesson is part of Henle First Year. Please let me know if you have any questions!