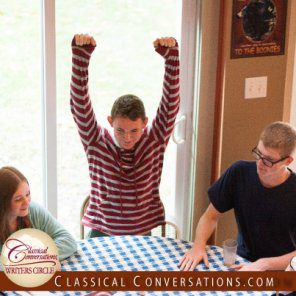 The Classical Conversations’ Challenge programs introduce students to many valuable subjects as they practice the skills of learning. These subjects include some that are undisputedly regarded as significant today, such as algebra, while others have fallen out of favor in academic circles, such as Latin, poetry, philosophy, and formal logic. In this age of intense focus on technology-related curricula, many people wonder why students should study subjects that appear ‘old-fashioned,’ or ‘outdated,’ in our fast-paced, change-oriented, pragmatic society. For many people, these subjects seem irrelevant: few, if any, are deemed necessary by most school systems for a high school transcript; several appear unimportant with respect to most college studies; many no longer seem relevant to future employment opportunities.

However, for centuries these ‘outdated’ subjects were included in the canon of what students were expected to learn. The common response to this observation is what formal logicians call the fallacy of “chronological snobbery.” Chronological snobbery judges that because these subjects are old, perhaps we could say ‘traditional,’ they are therefore irrelevant to contemporary life. As David Hicks puts it in Norms & Nobility, “there is altogether too much pretense in the current attitude…”1 As classical, Christian educators, following a long and successful tradition of pedagogy, shouldn’t we deeply understand why such subjects were once considered essential? After all, something that was traditionally part of learning for so long through human history obviously must have been selected for significant reasons.

In our postmodern passion for change, our culture jumps to the conclusion that tradition means people have become unthinkingly entrenched in the way things ‘have always been done.’ Although that can happen, is the problem inherent in tradition or does it perhaps have its source in some other thing…such as the human tendency towards complacency? If that is so, then the problem isn’t with tradition, but with human nature. For example, the flaw in learning Latin isn’t inherent in Latin; Latin has many clear benefits, from enriching knowledge of English as well as other Indo-European languages to enhancing understanding of vocabulary to providing practice in rigorous, logical, organized thinking. Instead, the difficulty may be that our culture is not willing to invest the time and effort that learning Latin requires, and has therefore rejected and eventually lost sight of the many blessings that accrue from studying it.

The same could be said for English grammar, formal logic, classic literature, and many ‘old-fashioned’ subjects that are currently being dismissed and weeded out of our educational institutions. As we see our modern culture rejecting traditional subjects all around us for the sake of ‘contemporary’ curricula, we must consider the possibility that it isn’t that traditional subjects are no longer valuable or applicable, but rather that our culture is complacently utilitarian: we seek to master our world and manipulate our environment as quickly and effortlessly as possible rather than taking the time and making the effort to understand it well so that we can govern it well.

In short, we dismiss traditional ‘old-fashioned’ subjects not because they are inherently flawed and have become irrelevant, but because we do not have the discipline to pursue them. In thus casting them away we have eventually forgotten that they are even of value. If we examine history, we see that in reality things become traditional not because people were too lazy, unimaginative—or restricted by the powers that be—to choose differently or to embrace change. Things became part of a traditional heritage because they were valuable in human endeavors: they contributed immensely to a rich culture, culminating in the amazing technology we are able to exercise daily, a technology we have been bequeathed by the classically-educated past.

Consider that most of what we deem to be great achievement was born out of classical, Christian education, which did indeed focus on these subjects that are currently dismissed as irrelevant; all you need to do is think of an artist like Leonardo, a scientist like Newton, a composer like Beethoven, or an author such as Shakespeare. In fact, all our greatest accomplishments, including those that allow us to use our cell phones daily, are rooted in the heritage of classical education (for more explanation about how this is so read Nancy Pearcey’s book The Soul of Science and James Nickel’s book Mathematics: Is God Silent?). Rather than dismissing ‘traditional’ subjects like Latin, poetry, philosophy, and logic, classical educators are wise to seek to understand what we have lost and to then aspire to reclaim the blessings they provide.

The following is a story to illustrate the point of what ‘old-fashioned’ subjects can offer. Abraham Lincoln once wrote that he truly learned to make his cases as a lawyer (in other words to ‘demonstrate a claim beyond the shadow of a doubt’) only after he had committed some of Euclid’s Elements to memory:

In the course of my law reading I constantly came upon the word “demonstrate.” I thought at first that I understood its meaning, but soon became satisfied that I did not…I consulted Webster’s Dictionary. They told of ‘certain proof,’ ‘proof beyond the possibility of doubt’; but I could form no idea of what sort of proof that was…I consulted all the dictionaries and books of reference I could find, but with no better results. You might as well have defined blue to a blind man. At last I said, “Lincoln, you never can make a lawyer if you do not understand what demonstrate means; and I…went home to my father’s house, and stayed there till I could give any proposition in the six books of Euclid at sight. I then found out what demonstrate means, and went back to my law studies.”2

Bear in mind that Euclid, known as the “Father of Geometry,” lived circa the 4th century BC while Lincoln, our sixteenth president, lived in the 19th. Over a millennium separated the two, but Lincoln was clearly not fazed by the gulf of time between them. This is because he understood the connection between learning the elegantly logical and systematic nature of Euclidean geometry—grasping its governing principles—and acquiring the ability to know how to build sound argumentation. What he learned in mathematics extrapolated to how well he functioned as a lawyer. Whatever one might think of Lincoln, he was clearly no chronological snob (see the web publication What Abraham Lincoln Read to view an extensive annotated bibliography) and he was a potent opponent in debate and a formidable statesman. Lincoln’s speeches, including phrases such as “dedicated to the proposition” in the Gettysburg Address, are said to have roots in his studies of Euclid.3

In a similar way, students who study so-called ‘old-fashioned’ subjects will come to understand universal principles and skills through them, and they will be able to apply them to the activities that they are called to engage in as adults. This will enrich and empower them in their vocations, even if their work as adults seems at first glance to be unrelated to the subjects they have studied. It is good to keep the following advice from Classical, Christian Education Made Approachable foremost in our minds as we educate our children:

The wise approach to parenting would be to remember that we are not raising children, we are raising adults. In other words, we need to focus our attention on preparing our children for mature, responsible adult decisions and behavior. It is for this goal that we transmit wisdom from generation to generation. This is the purpose of a classical education—to raise wise adults.4

All the so-called ‘old-fashioned’ subjects deserve “apology” (from the Greek sense of the word apologia, meaning ‘defense;’ see 1 Peter 3:15). That is one of the purposes of this series of articles, entitled Exploring the Challenge Programs. These articles will be designed to give a defense for not only the classical, Christian methodology through looking at the Challenge Programs, but will give ‘apology’ for some of the subjects in the programs intentionally chosen to facilitate and nurture our goals.

When we must often answer our students’ questions along the lines of “When will I ever use this again?” (How many times have you heard that question about algebra?), we must be prepared to provide a solid defense. It is important for us to realize that students are not asking these questions simply to challenge authority or tradition; they genuinely want to know why they must spend so much of their time studying a subject or practicing a skill related to it. We are asking them to devote a large part of their young lives to their education and while, yes, they should do it because ‘we say so,’ we also owe it to them to articulate the reasons why we have chosen these subjects for them.

Classical, Christian educators recognize that asking questions is good! In fact, it is the essence of the dialectic stage. We need to not only allow, but encourage, students to ask questions and we should take their questions seriously. As Leigh Bortins points out in The Question:

Remember, we ask questions not because we are cynics who believe that nothing is true and nothing can be known but because we believe that truth exists and can be known, at least imperfectly. Our questions…weed out falsehood and cultivate right thinking so that we can share its fruits with those around us.5

When our students ask us to justify why we have chosen certain subjects for them to study, when they question why they must study what the postmodern world tells them are ‘old-fashioned’ and irrelevant subjects, then we should be ready—through active discussion with them—to make ‘apology’: to give an answer. This answer includes not only the explanation of what classical, Christian education is, but what the components of that education are and why they are the best selections to help students reach the laudable goals we value.