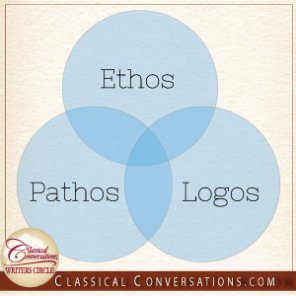 As an author of the Introductory and Intermediate Logic curricula, and now of the forthcoming rhetoric textbook Fitting Words, I sometimes ponder the relationship between logic and rhetoric, the last two parts of the Trivium. What do they share? Where do they diverge? How can our knowledge of one illuminate our understanding of the other?

Consider this. If you study formal logic, and even more so if you teach it, you will at times find yourself speaking in unusual ways. You might start with an argument like this: “Everyone voted for the bill except the most liberal senators, so Senator Schmidt must be a liberal, since he didn’t vote for the bill.” Applying the tools of logic, you will find yourself translating this relatively clear bit of reasoning into something strange:

Students of logic speak this way, not to be confusing or obscure, but in order that such standardizing of statements can make the logic clear. Translating arguments in this way allows us to strip away the extraneous aspects of language—the skin of grammar and the flesh of poetics—in order to expose the bare skeleton of reasoning expressed in the argument. We dissect arguments in order to analyze their structure more easily, to find their syllogistic form and determine their validity.

But such analysis, though useful for the logic student, is not at all rhetorically persuasive because, unlike logic, rhetoric must have the audience in mind. Logic does not concern itself with an audience; it cares only about truth. But the goal of rhetoric is the persuasion of people, and people are persuaded by more than logic. We appeal to the head through the heart. The art of rhetoric puts flesh onto the bones of bare reasoning, that we may lead others to truth in personal—indeed human—ways. Rhetoric, so to speak, is logos incarnate. Let me explain this further.

Rhetoric teaches us the three artistic modes of persuasion: logos, ethos, and pathos. Logos is the persuasive appeal to logic. In this first mode of persuasion, we apply the principles and methods learned in logic for the inventing of arguments. These are tools we can use to firmly establish the truths contained in our speech. The other two modes of persuasion inform us of the personal aspects of rhetoric. Ethos is the mode of persuasion achieved by the personal character of the speaker. Is the speaker likeable and credible? Does he or she demonstrate good sense, good moral character, and good will toward the audience? Do I find myself wanting to believe the message because I trust the messenger? Pathos is persuasion achieved by putting the audience into a proper emotional frame of mind. Now, let me hasten to add that this mode of persuasion does not allow for an improper manipulation of emotions. Rather, by pathos we acknowledge that our hearers are human, and thus we may properly appeal to different emotions in different situations. It was appropriate for Jonathan Edwards to arouse in his congregation a fear of divine wrath. It was right for Patrick Henry to provoke in his fellow Virginians feelings of indignation toward England and loyalty toward their homeland. The same is true for the great orators in Scripture. Paul in his epistle to Philemon appeals to pity, affection, confidence, and more as he urges Philemon to receive Onesimus back, no longer as a slave but as a dear brother.

The art of rhetoric gives us and our students the skills by which we may breathe life into logical arguments. It teaches us to speak in a way that is a blessing to others, that we may benefit our neighbor through our words. This is what our rhetoric should lead us to, persuasively presenting the truth by speaking the truth in love (Ephesians 4:15).

So logic is a tool of analysis, slicing words apart and pinning their pieces down so that we may study their structure, but as William Wordsworth warns us, “We murder to dissect.”[1] Perhaps. Such analysis may indeed take the life out of language and show us its bones. But by the art of rhetoric we preach to those bones, so that our premises and conclusions may come rattling together, that the flesh of poetics and beauty may come upon them, and that the breath of life may enter in.

the Rhetoric and Logic Instructor at Roman Roads Media, received a Bachelor of Science degree in Mechanical Engineering from Washington State University in 1984, and after working for Boeing for five years, moved to Moscow, Idaho where he taught Logic, Rhetoric, Calculus, Physics, and Doctrine at Logos School for 25 years. During that time he developed several curricula, including the award-winning Introductory and Intermediate Logic. He is currently writing a rhetoric course, Fitting Words: Classical Rhetoric for the Christian Student, which is slated for publication in Spring 2016. He enjoys teaching, reading, acting, and playing games with his friends and family. He and his wife Giselle have four children: Jamie, Josiah, Jacqueline, and Jonathan, and one grandchild.