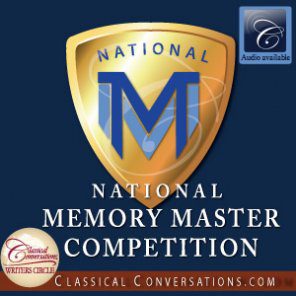 “Memory Master” is an honor bestowed on Foundations students who have mastered all of the memory work during the twenty-four weeks of Foundations class. We define “mastery” of the information as having committed the information to long-term memory, which means we do not cram for a single test and then forget it. I followed the “cram-it-and-forget-it” method in my own education, but now I see the foolishness of that and I am careful to help my children see the wisdom of truly mastering the material. We do not focus on test scores, but on what is really in their head to stay.

The amount of information we ask the students to master is lengthy. They recite:

Some of the information such as the timeline and math facts are repeated every year in Foundations. Other subject areas such as history, geography, science, Latin, and English rotate their focus on a three-year cycle. Cycle 1 explores ancient/world history and related geography; biology/earth science; and Latin noun declensions. Cycle 2 highlights medieval/world history and related geography; ecology, astronomy, and physical science; and Latin verb conjugations. Cycle 3 introduces US history and geography; anatomy and chemistry; Latin vocabulary lists and John 1:1-7 in Latin.

For Memory Master, students recite all of the information from the current cycle to their parent, to another Foundations parent a week later, to their tutor (later), and finally to their director.

Who should try to achieve the “Memory Master” honor? I would say every eleven- and twelve-year-old should try. If it is their first year in Foundations, it will take some serious effort and practice time, but it is certainly achievable if the student is motivated. I want all my children to become “Memory Masters” during their fourth, fifth, and sixth grade years so that they will have mastered all three cycles before moving up to Challenge A.

Should young students try for “Memory Master”? I have heard six year olds recite all the memory work confidently; it is certainly possible if they want to commit to the practice time. It takes some dedication on the part of the parent, too.

1) Use your iPad! Did you know that we now have an application for each cycle’s memory work? It is similar to the tutorial on CC Connected, but it has the fun of a touch screen and you can take it with you anywhere! Another great feature of the iPad application is the ability to scroll through the memory work by week. You can scroll down to go through every subject for one week or you can slide to the right to go through all items in one subject.

2) Make a rebus for tricky dates or lists—draw silly pictures that remind you of the words or the sounds of the words. For example, a rebus for “Neil Armstrong” could be a drawing of a nail, an arm, and a really strong man.

3) Make a memory route. My kids and I like to make giant flash cards on construction paper and tape them in a route around the house. They practice by going to each stop along the route and reciting the memory work that is there. When they recite it later, they can mentally visit each stop along the route and that will help them remember each item. We will probably do this with the Latin passage this year.

4) Have Dad call out the questions at bedtime.

5) Make colorful posters of items that are hard to remember and hang them around the house so you see them more often. Once I noticed that Leigh had Latin charts taped to the mirror in the bathroom so her boys could study while they brushed their teeth!

6) Make up your own silly songs, chants, and hand motions.

7) Recite while jumping on the trampoline, swinging, or bouncing a ball. (If you have boys, you know what I’m talking about—let them move!)

8) Give rewards as milestones for every subject mastered so they know they are making progress.

9) Borrow time from other subjects for a week. The week before “Memory Master” testing starts, we might do one math lesson and spend most of the day on memory work, taking breaks to read or play outside. Foundations lasts only twenty-four weeks, so I have plenty of time to resume other studies after week twenty-four.

10) If this is your first year in Classical Conversations or you feel that reading or writing needs to be your focus at this time, make a “mini-memory master” goal—pick one or two subjects to thoroughly master this year and give a special family reward when that goal is reached.

Becoming a “Memory Master” is hard work, but the benefits are great: your student will learn to work hard, they will learn many different methods of memorizing information, they will have the information firmly cemented into their long-term memory for use in Challenge, and they will experience the reward of achieving a difficult goal. These things will help prepare them for the Challenge courses, college, and beyond! It is a great gift you can give them and the time you spend working together will bring you closer together, too. I hope you enjoy “Memory Master” season!