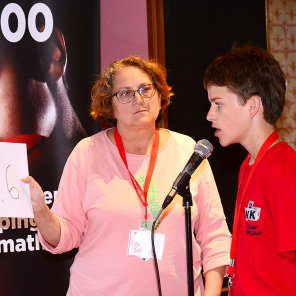 Allendale, Michigan—The DiPiazza family of Allendale have found an innovative way of financing their children’s college education—all they have to do is win national math championships and the accompanying cash prizes. John DiPiazza, 13, won the 2018 National Number Knockout (N2K) championship on May 1, including the $10,000 prize, and $2,000 for his mother, Rebekka, who is his teacher.

But this is nothing new for the DiPiazzas, since their daughter Sophia, now 15, won the 2016 N2K championship, and John was a finalist in 2017.

To the uninitiated ear, the answers sound like gibberish—faster than an auctioneer. But John not only knows exactly what he’s saying, he’s also performing dozens of math equations in his head to get those answers. All in 60 seconds.

John was one of 16 finalists in the National Number Knockout (N2K) competition held May 1 during a five-day cruise to the Bahamas aboard the Carnival cruise ship Liberty. The competition began with 16 10-14-year-old students from all over the country. When three lightning-fast rounds were over, John was the sole competitor left standing.

John is homeschooled. He is the son of Michael and Rebekka DiPiazza and has two older sisters and two younger sisters. His favorite school subject is history, and he also enjoys wrestling.

The National Number Knockout competition is hosted by Classical Conversations®, Inc., a classical education resource used by homeschoolers in all 50 states and 22 foreign countries. Classical Conversations now has more than 117,000 students enrolled in its tutoring programs. N2K is open to any student, ages 10-14.

The competition was sponsored by Thrivent Federal Credit Union, one of the largest faith-based credit unions in the nation. TFCU is headquartered in Minneapolis, Minnesota, and Appleton, Wisconsin, and has nearly 53,000 members.