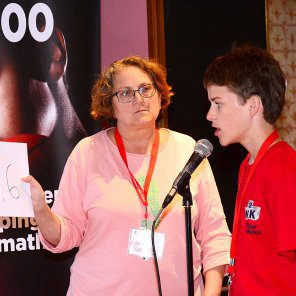 The 2019 National Number Knockout (N2K) competition is gearing up to return to the high seas this May. Sixteen finalists from across the nation will compete for the title of 2019 N2K National Champion and a $10,000 cash prize onboard the Carnival cruise ship Victory on May 1.

To the uninitiated ear, the answers sounded like gibberish—faster than a veteran auctioneer. But to John DiPiazza, 13, of Allendale, Michigan, he not only knew exactly what he was saying, he was also performing dozens of math equations in his head to get those answers. All in 60 seconds. John performed these mental math gymnastics so fast, in fact, that he won the 2018 N2K championship last May, along with a $10,000 grand prize.

Students interested in entering the National Number Knockout competition for 2019 must submit a scouting video via YouTube by Feb. 24. This year’s scouting video variation will be announced to the general public on Feb. 8.

The competition is open to all homeschool students in the United States and all military families abroad who can provide a U.S. Birth Certificate. N2K will pay for the cruise and travel expenses for the 16 national finalists. An additional prize of $2,000 will be awarded to the champion’s teacher.

The N2K competition is hosted by Classical Conversations®, a classical education resource used by homeschoolers in all 50 states and 30 foreign countries. Classical Conversations now has more than 125,000 students enrolled in its tutoring programs. The family-owned company is headquartered in Southern Pines, North Carolina. For more information, visit www.classicalconversations.com.

The competition is sponsored by Thrivent Federal Credit Union, one of the largest faith-based credit unions in the nation. TFCU is headquartered in Minneapolis, Minnesota, and Appleton, Wisconsin, and has nearly 53,000 members.