“See? There is intelligence there.” 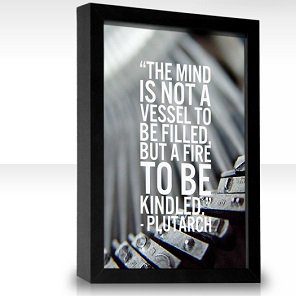 Recently, an accomplished youth choir participated in a workshop with an internationally acclaimed choral conductor. The workshop was aimed at music teachers and choir directors. The conductor spent several hours working with the youth chorale to demonstrate his conducting principles and techniques. Many of these techniques were highly classical, including modeling, repetition, and allowing the young singers to develop an innate musical sense and feel a deep ownership of their singing. In fact, he shared a maxim by the ancient biographer, Plutarch, which is often quoted by classical educators: “The mind is not a vessel to be filled, but a fire to be kindled.” He applied it to music, drawing out the parallel truth that children cannot be forcefully filled with musicality from an outside source: humanity has within itself the gift of music and this sense of music must be ignited from within.

There were many instances during the workshop when the conductor demonstrated classical ideas. One was particularly striking. The children were learning a round by Telemann, a German composer from the Baroque period. The piece was called “I Want to Praise the Lord All of My Life.” The choir was divided into several sections for the round. They had previously only spent about an hour on the piece, but most of the children had already memorized the music. One of the choir directors who normally worked with them ran through the piece, and it was clear that she was trying hard to lead the children into doing specific things at specific times according to her understanding of the composition. There was nothing wrong with her vision, but in trying to force the children into it she was producing uncertain, stilted music.

How the conductor transformed this performance is a profound example of how classical training differs radically from modern training. The modern educational norm would be to lay out each section precisely, and give the singers every cue they would need in order to control the overall movement and outcome of the music. In other words, the modern vision would attempt to fill the children with the music rather than attempt to elicit the music from the children. The piece itself had a great deal of structure and form, but in their director’s over-eagerness to convey this to the children, she was overlooking the fact that the children were capable of perceiving this inherent form for themselves. She was trying too hard to impose the musicality of the piece on them. She was not allowing them to do the important step of recognizing it and implementing it on their own. Her conducting, rather than leading them, was dictating to them. This tension caused confusion and a somewhat wooden performance. In contrast, the classical idea recognizes that human beings are innately musical, just as they are innately mathematical and linguistic. It emphasizes leading the children to perceive for themselves and then to produce the natural dynamics and flow—the beauty—inherent in music.

The result was beautiful. Without any director, with no active conducting, all the sections of the choir gave a gorgeous performance. You could feel the wonder and the appreciation from the audience in the deep silence that followed the performance and preceded a burst of enthusiastic applause. The conductor then walked back to the center of the stage. He said, “See? There is intelligence there.”

The music of Telemann itself revealed deep internal structure and had an intelligence—a musical ‘sense’ of its own. The intelligence of the children—the music innate in each of them that had been tuned by their choral training—was able to perceive it, be sensitively attuned to it, and produce it.

This is a wonderful example of young singers being rhetorical with music. They had mastered the grammar because they knew how to read and create music together, and they had memorized this particular piece; they were being dialectical as they listened carefully to themselves and to each other, synthesizing the musical organization and meaning inherent in the piece; and they were highly rhetorical when delivering it, creating a delightful musical performance of great beauty and persuasiveness. And, as they sang in praise, they moved their audience to praise…the most rhetorical moment of it all.