Taking It on the Road 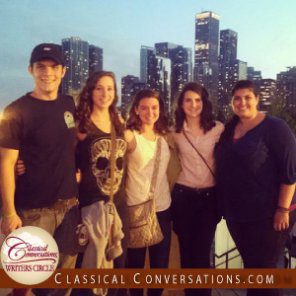 Aren’t road trips wonderful?! They promise adventure, surprise, discoveries, and memories. The perfect road trip is a blend of planning and serendipity: enough foresight to keep the destination attainable, but enough spontaneity to capture the unexpected treasures found along the way. My daughter, a college junior, and four of the Challenge IV friends she graduated with took such a road trip this summer; they made memories for a lifetime while seeing sights they had dreamed of for a couple of years.

The adventure began when they plotted their route, got directions, chose stopping places, figured out a realistic budget, recalculated when expenses began to mount, and set dates for “payments” to the general fund. Discovering that hotel expenses would break the bank, they made campground reservations instead. They used several lodging options:  KOA campgrounds, their parents’ hotel points, bedrooms in the homes of extended family members, and basements in the homes of CC families. They were ambassadors for all that is best about a classical education. They were able to share with several families what it means to be a classically educated student and they certainly demonstrated what it means for a graduate to become a thinker, not a blank-filler.

An ambitious undertaking, the trip began in North Carolina and took them west to Nebraska, then north to Chicago before bringing them home ten days later. They saw an immense treehouse in Tennessee, a giant Superman in Metropolis (for real!), and the St. Louis arch at night. They visited the Omaha zoo, the Chicago Museum of Science and Industry, and (apparently) every pizzeria along the way!

The experience was richly rewarding. They learned to set up their campsite early in the day, call ahead for attraction reservations (They actually got tickets to go up in the St. Louis arch at night!), manage their gas and meal budgets, and get along while living five to a tent. They forged some new friendships and cemented some old ones. They accomplished most of what they had planned and lots of what they happened upon; memories were made during both. They gained confidence along the way, discovering that they were up to the task of navigating their way across the country and taking care of all the details.

They came home tired, happy, and closer to each other than ever. They came home confident, beginning to believe that they are real grownups now! They returned with a joy in the journey, realizing that you do “need a plan” to be sure you arrive at your destination; you also need flexibility, since the journey is often as important as the destination.

The more I think about it, the more their adventure seems like our homeschool journey!