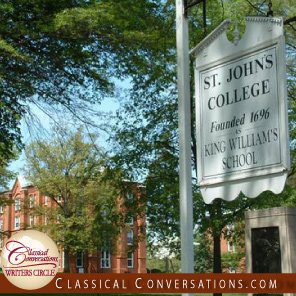 This month, I visited St. John’s College in Annapolis, Maryland for their Accepted Students Day. My oldest son, Alec, graduated from Challenge IV in the spring of 2013 and will complete his year at Mandala Fellowship in May. He has been accepted to St. John’s, so we visited the school along with another Mandala fellow who has also been accepted, Barnabas Holleran of The Wayfarer (a blog about Mandala Fellowship), and Classical Conversations’ faithful videographer, Tobin Duby.

The trip was exciting; it was also a bit embarrassing. To the latter, a lot of the families there did not know who we were, so they thought I had brought my personal videographer—that was a bit strange. To the former, I experienced something that only reinforces every decision we have made to use Classical Conversations through the high school years.

After a morning tour of the campus, the students broke off into sample seminars. My son joined a group of fifteen accepted students, an upper classman, and a St. John’s tutor, to discuss—for the next ninety minutes—Socrates’ Apology, the defense he gave at his own trial, at which he was sentenced to death. Barnabas joined a different group, but discussed the same text, one they had been asked to read in advance of the visit. On the trip up, both Alec and Barnabas expressed concern that they would not be able to defend themselves in a discussion—that they had not been trained well to that end. After their time in the seminar, both Alec and Barnabas retracted their earlier comments and fears. Not only had they managed themselves in the conversation, but also received praise from their peers at the quality of the observations and comments. They both felt prepared and it was proven to be true.

First, they learned how to learn. Both St. John’s graduates and Classical Conversations graduates learn how to learn. They learn how to approach a book, letter, essay, manual, or text and learn what is needed. They learn how to approach these things and then discuss them with others. Like Classical Conversations students, St. John’s students learn this from the model of education itself, but also from having it modeled for them by tutors (St. John’s uses the same term for their college tutors) who are also learning/teaching all of the subjects with the students.

Second, and this one was stated almost every time by every alumnus, they learned to be fearless. Having to learn from a text and be able to discuss and defend what you have learned during seminar developed a sense of fearlessness in these students. None of them were afraid to learn something new, with or without the help of a teacher or tutor. Many of them went on to learn other things in their jobs or after college simply because they knew they could; they were not afraid of the unknown.

Third, they learned to communicate well. The hours of discussion in seminar, the writing they had to do, and the time they would spend defending their papers or during orals prepared them to be able to communicate to those beneath them (their peers) or those above them (thinking on the hierarchy that might exist in the workplace). This ability to communicate orally and through writing, and to do so well, has served them in the workplace and in graduate school in ways they could not have imagined before they arrived there.

Finally, while none of them identified this, all of them embodied it: they learned a love of learning. All of them were continuing to learn in various ways. Some went on to graduate school, some took jobs that seemed to have nothing to do with their “liberal arts” education, some were mothers, and some taught themselves new skills, trades, and languages. All of them were people who continued to learn and to want to learn and to love to learn.

These are all practical skills, even if they do not seem to weigh as heavily as being able to say, “I have a bachelor’s degree in engineering.” They are. Each of these graduates indicated that they have been set apart from their peers in the workplace because of these things. Often, it was during the interview that the prospective employer first realized how special the graduate was. The ability to learn and communicate well shined for them during this time. Then, once they were hired, their ability to learn well (and the desire to continuing to learn) set them apart even further from their peers. One man, a lawyer, even shared that his superior at the law firm is constantly saying he wishes he had received the education this young man did. Like the St. John’s graduates, Classical Conversations graduates will be set apart from their peers in interviews and in the classroom. This is because of the practical, classical education they have received.