The Transformative Powers of Memoria: It’s Not Just About Memorization 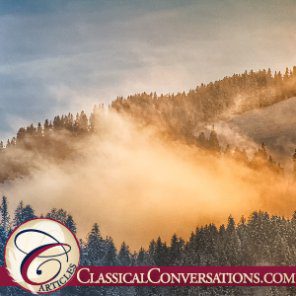 Translated from Latin, memoria literally means “memory.” That seems simple enough, but what does it really mean as the fourth Canon of Rhetoric? The first three are Invention, Arrangement, and Elocution; the fifth is Presentation or Delivery. We practice the Five Canons of Rhetoric in the Classical Conversations Challenge program, emphasizing the first three Canons in Challenges A, B, and I in the form of persuasive essays, and the last two in later Challenges. However, recently I praised God that I had the opportunity to witness the fourth canon in more depth as I helped my Challenge I daughter and two of her friends (that we have known since Foundations) prepare for a local speech tournament.

As my good friend and I listened to these almost-fifteen-year-old students give compelling, memorized Original Oratory and Persuasive speeches about comparison, failure, and worry—using experiences from their own lives and outside ethos from experts and the Bible—I became overcome with praise for God’s work in their lives. Here are young teens sharing with the world both their very vulnerable experiences and what they are learning. Presentation, the fifth Canon of Rhetoric, has always been the apparent focus of giving a speech. It is what the world sees. It is what the speaker shares. But what became even more apparent to me as we sat there listening was the beauty of Memory, the fourth Canon.

Memory is more than memorization. It is the unseen Canon that does the transformative work. After our students have Invented, Arranged, and carefully considered the Elocution of their written speeches, they memorize the speech and practice presenting it over and over. This process of memorizing and speaking the transformative words of truth over and over shape our Memory—the embodiment of what we learn. When we memorize Scripture and say it to ourselves or to another in a time of need, we solidify our belief in the truth. When our students prepare and present, the act of practicing and memorizing allows them to internalize what they have learned. It becomes part of them. They own it.

My daughter’s speech is about comparison. She has recently emerged from an awkward growing stage and has struggled with some disappointments and failure. Her speech is about the struggle she has had over the past few years comparing herself to others. She used a children’s book (Ruby in Her Own Time by Jonathan Emmet) about a runt duck to parallel her own story, shared some ethos from wise experts, and gave truth from the Bible to articulate her struggles. Wow! What a wonderful opportunity for learning, and a truly therapeutic process for my daughter. As she practices and presents this speech over and over all year long for speech tournaments, she is replacing Satan’s sharp needles of comparison with the truth of Christ and His thoughts about her as she develops into the person He wants her to be! She has received no earthly awards for this speech yet, but the eternal reward is the beautiful Memory. Powerful.

I encourage parents to help their children seize opportunities to develop Memory more fully. This Canon goes beyond simple essay and speech writing. Memory can powerfully transform the heart of a student. Students can take opportunities from the Classical Conversations’ Challenge curriculum, a speech club, a writing guild, church, or anywhere else they have the opportunity to prepare and practice a presentation. In Challenge, our students are immersed in great works of literature, Scripture, history, art, and philosophy, which give them opportunities to experience the human condition, interpret their own existence, and discover God’s place for them in the world. They are given opportunities to research, discuss, memorize, and present on important ideas that will shape their identity. My son, who graduated from Challenge IV last year, was transformed by the logic of Plato’s Meno, integrating Socrates’ wise discourse as an apologetic for his faith. While he never went as far as memorizing his speech word-for-word for the assignment, the act of wrestling, writing, defending and presenting his ideas to his Challenge 3 class made an impression in his memory that will never be forgotten.