Why the Easter Bunny Makes Sense 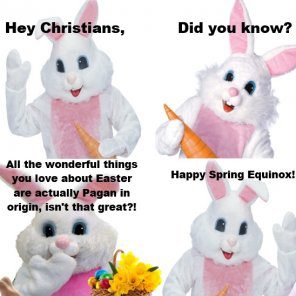 The traditional Christian church calendar has just marked the beginning of the fifth Sunday in the season of Easter. As the celebration of the Resurrection continues, I’d like to share some information I’ve been gathering regarding the symbolism commonly used in Christian celebrations such as Easter and Christmas—symbolism which, although often criticized by both nonbelievers and believers alike, is grounded, not just in the biblical worldview, but in common sense.

My research into this subject was spurred by an image (warning: inappropriate language present on the source site) I saw on an atheist friend’s Facebook page. He had shared it from an atheist humor website called “We [unprintable] Love Atheism.” I have seen “shares” by this friend from a whole family of related websites with names like, “I [unprintable] Love Science.” This one was so self-important that it invited a friendly response, and you can be sure that I gave one in the Facebook “conversation” that ensued.

The research I had to undertake to support my response—and, by the way, I love how easy research is in the information age—was so interesting that I didn’t want to keep it to myself. Here is a summary of the feedback I gave.

The rabbit was actually a broadly accepted symbol of the Virgin Mary in the middle ages, appearing in early Christian manuscripts and paintings of Mary and the Christ Child. This hails from the anecdotal belief at the time that the rabbit was hermaphroditic and thus could reproduce without mating; and while medieval scholars probably knew better, they adapted the cultural associations with the rabbit as a recognizable icon for the virgin birth.

Easter eggs come from the practice of fasting during Lent (the season in the Christian calendar preceding Easter), which is a time for reflecting on Jesus’ example of self-denial. Though Lent is observed in many ways, traditionally it involved refraining from eating meat and eggs. Thus, on Easter morning, Christian children were excited to see eggs again, and Christian parents created the practice of decorating them and hiding them.

Christians chose the spring equinox as the time to commemorate Jesus’ resurrection because what the planet and seasons were doing at that time best reflected the theme of such a commemoration.

These facts are a perfect illustration of the fact that the more you know, the better your discernment.

The fact that eggs had been a long-standing symbol of new life in pagan thinking does not make them a pagan symbol. Christians and pagans (and everyone else) have used eggs as a symbol of new life, because eggs actually contain new life. That symbolism doesn’t have its origin in paganism; it has its origin in what every child knows about eggs. Implying that Christianity (or any system of thought) should have to create entirely unique symbology to avoid being pagan is just silly. Words are symbols too—should the church, perhaps, have made up an entirely new language in which to pen the Bible?

At this point in this Facebook “conversation,” another individual jumped in with a comment about Christmas. Here it is, quoted below:

same thing with Christmas traditions. i don’t remember which people it was (the Nordic people maybe?), but a pagan group of people brought evergreens into their houses to symbolize “life” or “continuity” during the season of dying and decorated them with apples, etc. (now ornaments). December 25 is the birth of one of their gods, while the birth of Jesus the Christ is presumed to have been in September, i believe. so, very little of what we do as a christmas tradition has anything to do with the Christ.

I was happy to take the opportunity to look into this topic as well. Here is what I discovered:

The problem with thinking Christianity “got the idea from the pagans” is that you’re ignoring the most obvious thing about an evergreen tree: you look around in winter when everything looks dead, and there’s one kind of tree that looks alive—any religion that had a concept of eternal life would quickly absorb the evergreen as a symbol. To illustrate my point, just take a look at German and Scandinavian pagans, who used evergreens, but who didn’t have any communication with Egypt. They didn’t start using evergreens because they saw the Egyptians doing it; they started using evergreens because evergreens stay alive through winter!

The person who made the “joke” expressed in this image is assuming that symbols don’t contain any meaning, and just get copycatted from one religion to another. That’s absurd. The reason everyone uses evergreens as the symbol for eternal life is that they’re a good symbol for eternal life. The transhumanist movement today could just as easily start using evergreens as a symbol of their views, and if they did, it would be silly to make a picture that said, “Hey, transhumanists, did you know that your symbol actually comes from paganism?” because the transhumanists would say back to you, “Uh, no, it comes from evergreens, like, from nature, and we chose it because evergreens escape death, just like we want to.”

The Date of Christmas:

First of all, December 25 is simply the day the church has chosen to celebrate Christ’s birth. I don’t think anyone is claiming that it is Jesus’ literal birthday (since no one really knows, and May is actually a more popular guess than September, as far as the month of his birth goes). December 25 was chosen in part because there was a group of Christians (in North Africa) who had designated Easter as March 25, and since it was popularly believed that Christ died and was incarnated on the same day of the year, December 25 (nine months after March 25) was believed to be the day of his birth. The date became popular, and since everyone was looking for a date to be designated for celebrating Jesus’ birth, December 25 gradually evolved into that day. One thing that may have made this date stick is that, meanwhile, the Roman emperor Aurelian declared a new holiday on December 25: the birth of Sol Invictus, or “the Unconquered Sun.” This was a coincidence, but since Christians had already been using the sun as a symbol of Jesus, they saw this as a good conversation starter with Roman nonbelievers. “Oh, you’re familiar with the idea of the sun being born? Let us tell you about the day that the light and center of the universe was born.” You see how it works…

This graphic would be just as ridiculous if it said, “Hey atheist doctors, did you know that medicine originated in paganism? I guess you’re not a very good atheist!” The whole discussion misunderstands the nature of symbols! Symbols actually have meaning: the sun is used as a symbol of the center of our “world” because it is the center of our “world”—at least the part of the universe that we live in. A rabbit is a symbol of fertility because it is fertile.

There hasn’t been another response to the points that I made in this Facebook interaction. However, I have made an additional, interesting, discovery: halfway through writing my response, I realized I was making an argument, not about religion, but about symbols. That’s when I realized what’s really wrong with the atheistic worldview. The maker of this picture clearly thinks that Christians chose eggs, dates, and whatever, not for any symbolic qualities those items possessed (because he doesn’t see that they have any), but because pagans had used them before. By this logic, then, pagans must have chosen these symbols not for any symbolic qualities they possessed, but for no reason at all. What we see here is how a materialistic upbringing has left this person unable to grasp symbols. He sees only the material world, not the metaphysical—thus a rabbit is not, to him, a representation of spontaneous life; it’s nothing but a random object that some people happened to use in their rituals for no reason.

It strikes me that if you view the world from the atheist’s perspective, you have an exceedingly good reason for thinking that religious people—people who see symbols everywhere they look!—are stupid. It also strikes me that a person who lives in a world without symbols is in an exceedingly pitiable position.