Words that Count: Discovering the Mathematics of Poetry 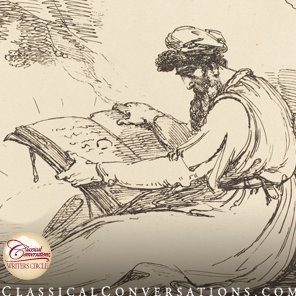 In a 2011 article for the American Mathematical Society, mathematician Cai Tianxin made a striking claim. He wrote, “It could be said that mathematics and poetry are the freest intellectual activities of human beings.”1

His suggestion is doubly daring: first, because it brings together two arts that are typically placed side by side only to show the contrast between left-brained, technical, objective studies and those that are right-brained, creative, and subjective; and second, because it attributes freedom to what are arguably the most formal, structured, and precise uses of numbers and words respectively. That being said, by the end of this essay, I hope to persuade you that both premises of Tianxin’s claim are justifiable. 2

Like Tianxin, I believe firmly that mathematics and poetry exist in cooperation rather than competition. Poetry is a language built on schemes, tropes, and condensed syntax. Giving order to poetry are the same rhythm, harmony, and order that characterize a balanced equation in math or chemistry. Not all poetry is written with a regular meter, but learning to recognize the formal rhythms of poetry will grant you access to the work of great poets across the centuries and also give you a foundation for understanding poetry that deviates from those forms. As American poet Wallace Stevens said, “In poetry, you must love the words, the ideas and the images and rhythms with all your capacity to love anything at all.”3

Emily Dickinson is an excellent poet to read for meter. Read the following two lines of poetry aloud, and see if you can identify the stressed syllables.

Because I could not stop for Death –

He kindly stopped for me –

Some variation is perfectly normal, but your reading probably sounded something like this:

“beCAUSE I COULD not STOP for DEATH –

he KINDly STOPPED for ME.”

Get ready, because I am going to ask you to apply some mathematical thinking. If you are given the fraction 8/4, you might notice that you can divide both the numerator and the denominator by 4, leaving the simpler number form, 2. Similarly, if you are given the equation 4x + 4y = 8, you might notice that all of the elements are divisible by 4. So, a simpler form would be x + y = 2.

If you answered, “US,” or one unstressed syllable followed by one stressed syllable, you would be correct. Poets call this type of “foot” an “iamb.” Other types of feet are “trochee” (SU), “dactyl” (SUU), “anapest” (UUS), and the less common “spondee” (SS) and “pyrrhus” (UU).

If the word “iamb” sounds familiar, it might be because you have heard Shakespeare’s poetry called “iambic pentameter.” Remember, the foot is one part of a poem’s meter. The number of feet in a line is the other element. Here, knowledge of Greek and Latin roots will serve you well. The prefix “mono-” tells you that a line has one foot, or one stressed syllable. “Di” means two, “tri” means three, “tetra” means four, “penta” means five, “hexa” means six, “hepta” means seven, “octa” means eight, and so on. Using this information, I bet you can figure out how many stressed syllables are in each line of many of Shakespeare’s plays.4

Now, go back and look at the Dickinson poem. How many feet are in each line? The first line has four stressed syllables, and the second line has three. So, we would say that this poem alternates lines of iambic tetrameter and iambic trimeter.

Learning to read and write the mathematics of poetry seems like a lot of work when you first begin. You have to learn a new vocabulary of feet and metrical terms, and you have to set aside the contents of the poem to count out its rhythm. A novice musician whose world is ruled by a metronome might feel the same way.

In that metaphor, however, I think we would all agree that mastery of the forms leads to freedom of performance. Professional musicians can sight-read music when they rehearse with a new ensemble, and because they understand rhythm and time signatures, they are able to synchronize their various instruments and focus instead on the dynamics of the piece. As Irish poet William Butler Yeats wrote, “…rhythm [is] the wheel of Eternity, on which alone the transient and accidental [can] be broken, and the spirit set free.”5 In the same way, when students first learn the language of poetry, the mathematical precision of line length and meter can free their creativity by giving them a structure to fill with meaning and truth.

So far, I have argued that poetry is mathematical, and for a young writer its mathematical structure is one of its most liberating aspects. But is that enough to call poetry and mathematics “the freest intellectual activities of human beings”? If we understand mathematical equations to be a series of numbers expressing logical relationships, distilled to their purest and yet most complex form; then we can also understand poetry to be a series of words expressing ideas, refined to similar purity and complexity. In both cases, pragmatic application is of secondary concern, even though use often follows understanding of forms.

In addition to meanings conveyed by patterned symbols, poetry and applied mathematics have in common both economy and mystery. A few symbols convey a great deal. The symbols’ full meanings and their effectiveness in creating meanings and beauty remain inexhaustible.6

I love the words he chooses—economy and mystery—to describe both mathematics and poetry. They make me think of a precious stone carefully mined from a rock and then cut, faceted, polished, and honed to show off every exquisite color and flash of reflected light. The mystery unveiled by this act (How can I use these forms? What can I beautify with them? What can they teach me about the world and its Creator?) is a source of inexhaustible freedom.

2For the sake of full disclosure, I have to admit that I have a personal stake in this discussion because I consider myself a poet, but I also take satisfaction in the order and structure of mathematics. No one wants to be a walking contradiction.

6Joel Cohen, “A Mindful Beauty: What poetry and applied mathematics have in common” (The American Scholar, Autumn 2009).

Cohen, Joel. “A Mindful Beauty: What poetry and applied mathematics have in common.” The American Scholar (Autumn 2009).

Growney, JoAnne. “Mathematics in Poetry.” Journal of Online Mathematics and its Applications 6.1262 (October 2006).