You Don’t Need to Know How to Solve the Math Problem!! 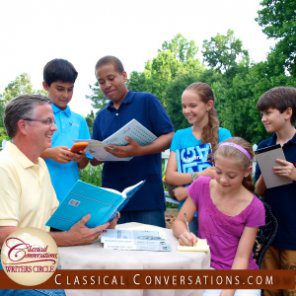 For the past ten years, I have talked to families and even tutors who worry about teaching high school math because they do not know how to solve the problems. Interestingly, none of us seem to worry that we do not understand the questions.

Last week in my Challenge II class, we were looking at a concept problem. We were trying to figure out the following:

As soon as we finished reading the problem aloud, students began shouting out answers. Within seconds, I had heard all four answers. Other students wanted to rush forward and figure out how to solve it. I asked them to please pause and consider that they had not even figured out the question.

Now that the room was silent, I asked, “Will someone please give me the definition of a real number?” Silence. It seemed like a good time to review the math terms we had encountered to date. I walked to the board and began to write some words on it: real number, imaginary number, whole number, counting number, integer, rational number, irrational number. I could not get a consensus on any of these terms, so we began to define each. I assigned each student to find a definition using the available resources. (For the sake of this article, I am using the definitions from Saxon Algebra II.)

Imaginary Number – The square root of a negative number. (This one was not really needed for this problem, but it seemed as good a time as any to review imaginary numbers, especially since the words real and imaginary are generally considered to be opposites.)

Rational Number – Any number that can be written as a quotient of integers. (This was not helpful yet, since we did not yet know how to define integers.)

Irrational Number – Any number that cannot be written as a quotient of integers. For example, the numbers Π, e, and √2. (“Did that help us?” I asked. One of the students piped up, “I think so. Pi has no repeating pattern, so irrational numbers must be those in which the numbers after the decimal don’t display a repeating pattern.” “OK. That makes sense to me. Now, give me an example of a rational number. That would be numbers like 2/3. There’s a pattern to the answer .66666666666667.”)

Integer – Any member of the set {…,-4, -3, -2, -1, 0, 1, 2, 3, 4}. (Aha! Now we are getting somewhere. Apparently, integers include positive and negative numbers. Also, it is clear from the numbers included in the brackets that this set includes only whole numbers, not decimals or fractions.)

Whole Number – Any member of the set {0,1,2,3…} (I do not see negative numbers here, how about you? This must be what makes them different from integers.)

Student: The answer to a division problem.

Me: OK. Give me an example of a division problem using integers.

Me: OK. So a real number can be a whole number. Someone else give me an example of a division problem using two other integers.

Me: OK. So we have now established that real numbers include decimals and fractions. I think we finally have enough information to address the problem we started. Let’s return to the original question.

Can we plug in zero for x?

Student: Yes. In that case, x2 and x4 would both be zero, so the answer is C.

Me: That is true, but let me ask another question. Can we plug in ½ for x?

Student: Yes We just said that real numbers include fractions and decimals.

This was a very long way of saying that students need to spend way more time learning to understand questions than they do in learning to answer them. It took us a long time to solve what looked like a simple math problem. However, we were able to review a lot of vocabulary. Once we did, the problem was relatively simple. We never would have been certain of our answer until we were certain of the definition of real numbers.

We need to train up a generation of students who can think deeply about the questions before rushing into the answers. This is true in all subjects, not just math!