A Homeschool Parent’s Musings: What Is Christian Paideia and Why Does It Matter?

“Education as paideia is not preparation for life, for college, or for work; it is our inherited means of living fully in the present, while we grow in wisdom and in grace, in conscience and in style, entering gradually into ‘the good life.‘”1

My summer Parent Practicum just ended. On the last day, testimonies hailed how Classical Conversations changed families’ lives. The classical curricula fashioned finer homeschooling and the Christian emphasis complimented the home environment. Many emphasized how the community came alongside in various struggles and made them easier to bear.

These tales surpassed mere descriptions about classical education with Biblical ideals. They encompassed more than homeschooling techniques or the blessings of supportive friends. They tapped into our longing for something more. Through the stories, this longing kept surfacing, with glimpses, hopes, and desires for something more…but, longing for more of what?

The ancient Greeks viewed education as much more than learning how to read, figure, understand history, and gain skills. Their education was prescriptive and purposeful. It encompassed the whole individual, and it passed along social, cultural, and political ideas. The Greeks called this broad idea of education paideia. Merriam-Webster’s Dictionary defines paideia as “training of the physical and mental faculties in such a way as to produce a broad enlightened mature outlook harmoniously combined with maximum cultural development.”2 David Hicks described the ancient Greek citizenry view of paideia as “a natural right,” as a mindset, and as a normative outcome of a classical education. Students were trained to embrace lives full of virtue and purpose and also to pass on what they had learned to others.3

Paideia perpetuated Greek culture and ideas. Paideia informed individuals how to live an active life of reason that would be virtuous and magnanimous in order to create what Aristotle called happiness, eudaimonia.4 He believed that character was formed by the balance between making good choices and possessing good fortune. Aristotle’s happiness depended upon self-sufficiency, autonomy, and the ability to be in a superior position as a patron so as to be able to bestow gifts and favors upon others rather than being in an inferior position of receiving them. Being in debt as a client, whether in favors or gifts, was not good fortune and it could enslave the receiver to the giver.5

Aristotle gave good advice on how to achieve this happiness. It seems conscientious Greeks would rather calculate to maintain the best appearance by making better choices than fall from being a beneficent patron to an indebted client. Good fortune was secured by the benefits of status, noble family, health, wealth, and good alliances. A life of happiness led toward the good life and it was desired by the informed Greek. Overall, Greek citizens strove to live virtuous lives and to avoid corruptions, but the road was very narrow and many pitfalls needed to be avoided.

What is Christian Paideia?

The Apostle Paul was very familiar with Greek thought and paideia as evidenced by his Mars Hill speech recorded in Acts 17:22-31. He was classically trained and was educated in the Jewish tradition as a Pharisee. After his Damascus Road experience, Paul studied the Scriptures and by the power of the Holy Spirit became an Apostle to the Gentiles.6 All of his experiences formed him and prepared him to live the life of happiness, eudaimonia, but with a chief difference. Good fortune was superseded by the indwelling of the Holy Spirit which enabled Paul to make better choices and live more virtuously. Paul could both know what was good and act upon his knowledge.7

Paul realized and taught that grace, God’s unmerited favor because of Jesus Christ’s sinless life and substitutionary sacrifice, secured God’s benefits that were not dependent on status, noble family, health, wealth, and good alliances. Instead, the believer hilariously embraced this miraculous fortune and responded with gratitude directed towards God.

The Apostle Paul’s teachings urged the Gentiles to embrace the new way of happiness. This was not based on the idea of Greek paideia that ceased beyond autonomous man, but instead it welcomed the work of the Holy Spirit within the believer. No matter what the circumstances, the believer could agree with Paul that “to live is Christ and to die is gain” (Phil. 1:21, ESV). The juggling to be a patron, to be in a superior position over others, no longer held power “now that you have been set free from sin and have become slaves of God, the fruit you get leads to sanctification and its end, eternal life” (Romans 6:22, ESV). For the “churches’ gift and gratitude nexus works only if there is in fact a single divine Benefactor and Patron to whom all the members are clients who owe grateful service, if all are fellow slaves (douloi) of the one Lord, Jesus.”8

Besides Paul’s expositive teachings, in many of his letters to the churches he also included character formation on how to live as new creations. Paul exhorted the Ephesians, “Fathers, do not provoke your children to anger, but bring them up in the discipline and instruction of the Lord” (Ephesians 6:4, ESV). The original Greek noun paideia translated as “instruction” in this verse strongly suggests Christian character training.9 Paul sought to establish the idea of Christian paideia that far exceeded academics. He was modeling and informing others how to live, act, and love within the community of believers. He desired a totality of immersion, an enculturation, which would truly affect all aspects of Christian life and a child’s upbringing, Christian paideia.10

How do I Visualize and Appropriate Christian Paideia?

If enculturation is necessary for true Christian paideia, a good place to start is with expanded classical academics. The founding homeschool mother of Classical Conversations, Leigh Bortins, expanded her idea of classical Christian education based on three planks of a mission, a model, and a method. 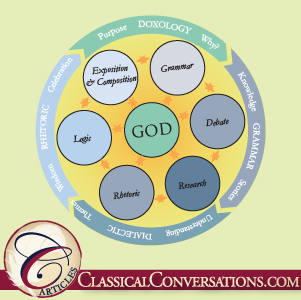 The Mission, the Doxology Sphere

The mission, to know God and to make Him known, takes preeminence and guides the others. A good visual representation of Classical Conversations is the sphere of Doxology. The outer layers of the sphere represent the trivium associated with Biblical ideals of knowledge, understanding, and wisdom. The next inner layer represents the specific areas of study that integrate with each other and gain their purpose and glory as they radiate to and from the center of all things, God. The sphere of Doxology not only shows the form of all study as praise to God, but also conveys the liturgical reality that all things emanate from Him.

The model of Classical Conversations looks through the Christian lens to practice classical learning skills of the seven liberal arts—the trivium and elements of the quadrivium—while studying subjects for meaningful academics. The trivium or “three ways” includes grammar, which is the beholding or soaking in knowledge; dialectic, which is the pondering or growing in understanding; and rhetoric, which is the acting or bearing fruit in season, which is wisdom. The quadrivium includes the mathematical liberal arts study of arithmetic, geometry, harmonics, and astronomy.

The method adds supportive community for the homeschool families to interact with each other. Indeed, the method provides opportunities for action—opportunities to learn, to equip, and to teach others. The method includes a centralized meeting once a week for homeschool families during the school year, Practicums for parent training in the summer, and other trainings throughout the year for parents and community directors—all for the goal to expand classical Christian academics.

Beyond the sphere of comprehensive classical Christian academics, Christian paideia necessitates community. This could be represented by another visual sphere filled with concentric circles. The Christian homeschool is seated in the center. Here in the home, the family cultivates love and learning with wonder and a taste for beauty. The heart of the home reflects character imitation and the pursuit of goodness. Children’s souls are nurtured and become full through the sacrificial, faithful homelife.11 As children grow and mature they move outward through the layers of circles where they are supported and encouraged in community life by sharing experiences and serving one another whether in their extended family, Classical Conversations community, church body, or in the neighborhood of man. Strong Christian community influences and provides confluence of faith, friends, and ideas.

Christian paideia naturally contemplates time and its use in space. This could be represented by another visual sphere featuring free time, or leisure, in the center surrounded by other moving spheres of time investment, such as church, community, fine arts, sports, friends, and work. Time judiciously allocated is life-giving and balanced to meet particular avocations and acts of service. In the ancient, classical thought, leisure is active time for individual development and growth that is focused, intentional, and well ordered. It is not idle. There is also enough particular space to reflect and receive divine moments. Leisure should not be confused with play time or down time that one spends. In addition, time that is over scheduled or that does not allow margin is not restful and creates stress and enslavement to the clock. The student and family need freedom to rejoice and respond to everyday opportunities that are received from the hand of God as one inquires, seeks, and listens.

Why Does it Matter?

Classical educators desire a climate of Christian paideia but wonder if it is truly possible in contemporary culture when considering other avenues of influence in secular, political, and global realms. The visual ideas of the three spheres incorporate aspects of classical Christian academics, community, and the use of free time as a means to inhabit that climate. When combined, these spheres represent activity that is balanced, harmonious, and restful, allowing for growth in mind, body, and spirit. Christian homeschool families embody a microcosmic habitat that devote a self-sacrificial lifestyle for the hope of a greater goal which is living the good life for the glory of God. Although this may seem idealistic, lofty, and in the presence of everyday failings often impossible, there is a consistent hope that binds and renders it possible to avoid pitfalls and walk the narrow road of Good News. A realized Christian life acknowledges humility and thankfulness. Gratitude toward the Great Benefactor unites, levels, and lifts our servant hearts. Gratitude stations us, the blessed clients, on the broader plain to see what is possible.

4www.merriam-webster.com/dictionary/eudaimonia, can be thought of as human flourishing

6Acts 22 gives both the academic and spiritual credentials testimony by Paul.