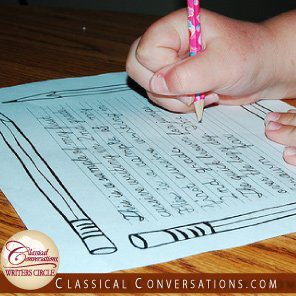 I was so proud that day.

As my son and I joined my husband’s company to volunteer at a local charity, I was counting myself as blessed. In my head, I was thinking about how neat it was that we could take a random school day and turn it into a chance to make a difference. Truly, I was feeling a little puffed up as my son was the only twelve year old participating in a group of adults. To say I was letting my homeschool ego show would be an understatement.

For the event, we had to sign the volunteer sheet—filling in our name, address and information for name tags. As I went to sign my name after my son’s, I noticed that not only was his handwriting barely legible, but he had misspelled our last name.

I was horrified. How could I have overlooked the fact that my son did not know how to write his own name? And he was a twelve year old. Yes, we had worked really hard on all of our subjects like math, Latin, grammar and science, but something as obvious as our own name was drastically overlooked.

From that day on, I had my son write both his first and last name on every paper he created. In addition to this, I decided to kick it up a notch by having him practice his copywork with the PreScripts Cursive Passages and Illuminations: American Documents book. He complained about it at first, but then fell into a steady groove of making them part of our day.

Over time, I learned that my son was able to have excellent handwriting—he simply lacked practice. He did not have confidence in the shapes the letters required. So every time he wrote, it was difficult and painful. Through daily practice, his abilities drastically improved. He progressed from barely legible handwriting to being the student who receives compliments from his tutor.

There are so many well-researched facts about why cursive handwriting is important—manual dexterity, creativity, reviewing historic documents, and reading letters from grandparents, among many reasons. But more than that, the way we write and sign our name is how we communicate who we are to the world.

Cursive handwriting is a skill that many take for granted or even consider to be a throwaway piece of learning, replaced by our modern technology. But isn’t it funny that a handwritten letter in the mail, neatly addressed to us, is the first letter we open? How we write and express our thoughts on paper says much about who we are.

I recently spent time with my friend Karen who lost her husband unexpectedly this fall. She said that the last thing her husband had written to her was a sweet card for their wedding anniversary. His final words were a gift to her which she adored beyond explanation. She did not say it, but my guess is that she carried that note with her wherever she went as a reminder of his love.

Karen said her greatest comfort was the precious cards and outpouring of notes from friends and coworkers from near and far. One friend had personally penned a poem for her husband which captured the man he was. These small gestures of heartfelt encouragement to her as she was awash in grief, helped her find a way to get through the dark days.

Our written words are so much more than ink on paper. They are like tiny pieces of our heart captured in time. Words on paper have the power to heal, encourage, remember, and treasure life for generations to come.

I think George Bernard Shaw said it best when he described it as “the beauty and nobility, the august mission and destiny, of human handwriting.”

Yes, I am pleased to say that my son is learning to write beautifully. I want him to be part of the generation that reclaims his education for God. What a gift to take something that the world declares as mundane and proclaim it for beauty, nobility, mission, and destiny.

More than that, to show that we are part of a future generation that discovers greatness in doing things with excellence—in the way we express our thoughts, the way we comfort others, the way we share our love, and, yes, the way we write our name.