A Triumph in a Boy’s Life: Alan and His Liberal Arts Education 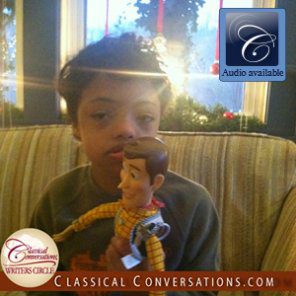 Upon looking at the scope and sequence of any classical curriculum, one often feels an overwhelming sense of awe for anyone who could accomplish all that is being proposed, as well as a sinking feeling concerning one’s own likelihood of being counted in that number. I propose that “checking off all the boxes” is the wrong way to look at a liberal arts education and the right way has more to do with helping our children to more fully realize their potential as human persons—as image-bearers of God.

My eleven-year-old son, Alan, has Down syndrome. Ever since his open heart surgery when he was six months old, he has been exceptionally healthy. He started walking when he was four. Early on, he learned a little bit of sign language to help communicate, but quickly abandoned it when he decided to use words instead. The language he speaks is a rough approximation of English, but he has certainly created his own dialect. Fortunately for us, he is a good teacher and most of the household understands “Alanese.”

Alan is enrolled in Classical Conversations and is a part of the “Masters” class in our community with his triplet brother, Calvin, and his triplet sister, Rose. He spends his morning participating in grammar review games, science experiments, art projects, new grammar drills, and oral presentations. From the reports I hear, there is very little that happens there which does not directly involve him as a member of the class.

An oral presentation in a Classical Conversations Masters class consists of a one- to three-minute presentation from a student to the class concerning a topic that interests them. These are prepared during the week prior to class and often involve a visual aid. Alan regularly presents for around a minute about one of his favorite toys. Woody, Iron Man, and Spider-Man are the regulars and his class has become very well-acquainted with those three toys.

However, upon arriving at class yesterday, we realized that we had not helped Alan to prepare a presentation. He hadn’t even brought any toys with him, so we decided he would simply skip his turn to present this week. Apparently, we forgot to inform him of that, because when the time came for him to present, he walked up to the front of class as per the norm.

Alan spoke Alanese for about a minute, said, “Thank you,” and returned to his seat. Thankfully, Calvin was there to interpret. It turns out that Alan had related an event from the preceding week about a game of tug-of-war that he had had with our family dog. Alan has a toy monkey which our dog loves to chew on; hence, the resultant game of tug-of-war.

Alan’s presentation yesterday is no small thing in his life or in ours as home educators. We have been preparing and prompting his presentations for years. This time, however, he decided that he had something to say without our prodding. He was given an opportunity to speak publicly before a crowd, he had been trained into a habit of public speaking, and he was not going to be denied his chance to relate an event in his life. We will never know if he prepared this beforehand or simply pulled off an improvisational speech, but either way, this is huge. Relating a narrative is to imitate his Creator. Having an opinion is part and parcel with his being human. Having the desire and the chutzpah to pull this off publicly is nothing less than his becoming an educated human.

Often as parents, we have lower expectations of our children’s education than we ought because we were educated under the modern, progressive paradigm; i.e., we set our expectations based on how poorly educated we are. We also have misguided expectations because we think in terms of “utility” instead of in terms of “humanity.” We tend to measure a person’s utility as a function of their faculties. We also tend to measure a person’s worth as a function of their utility.

Certain parts of Alan are broken. There are physical reasons why he does not speak as clearly as a non-Down eleven-year-old. His faculties for public speaking are such that to measure him against a non-Down eleven-year-old would be ridiculous. However, since his utility is not the underlying factor for his worth, the comparison is not necessary. In reality, that comparison would be counterproductive. I am not rejoicing in Alan’s presentation yesterday because he is becoming more “normal.” Curse the bell curve! I am rejoicing because Alan took a step toward his personal potential as a human person—an image-bearer of God—in society with other image-bearers of God.

When we look at the scope and sequence, read the articles, and peruse the book lists in the new Classical Conversations catalog, we quickly realize that the bar has been set high, but the way to measure whether or not that bar has been reached is probably not what we think. We cannot ultimately measure success by sheer quantification of facts memorized, books read, essays written, number of presentations presented, or, God forbid, what they score on their SAT. To quote Andrew Kern on assessment,

So when we assess—if not numbers what should we be looking for? Well, we teach the liberal arts, right? Seven liberal arts, or maybe just the three—the Trivium. So how do you assess if somebody is mastering the “Liberal Arts?” Liberal—Free—right? That’s what it really means: arts of a free person. What you look for is this: Is that child more free because he learned this lesson or is he less free? I’m not sure how to measure that. You know what it takes? It takes Wisdom. And what’s wisdom? Well, it’s a number of things but one of the key principles of it is knowledge of the nature of a thing—knowing how to treat something according to its nature.

So, I rejoice in Alan’s presentation yesterday in that it is a fruit of his liberal education. I rejoice that Alan is a free human person and becoming freer every day.