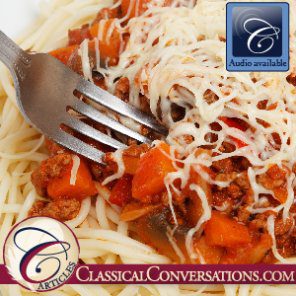 Do you know what basketball, spaghetti, and Mt. Everest have in common? Will you believe they are all related to a Latin lesson I had with my son?

Last year, I was blessed with being my son’s Latin teacher. My son Calvin is thirteen years old and a Challenge A student. For a bit of history, Calvin completed both Foundations and Essentials, beginning Foundations when he was six years old. He was a Memory Master once, almost twice. Almost.

In the Hays Haus, we set up three principles for Challenge A Latin instruction:

The following is the story of our Latin adventure attempting to apply these principles through the first semester of Challenge A.

Very soon after beginning Latin this year with Mr. Henle’s purple and blue books and the newly minted Latin A Workspace, I saw that we could not accomplish everything on the list of things to do in an hour, so we played it by ear. I have made it my family’s goal to do no more than one hour of any course in a given day. Sometimes this is not possible, but it is our goal.

We would begin each day with a vocabulary review using the flash cards he had created. Once he had collected a fair number of flash cards, there was no way to review all of them in a single sitting, so we would move through different parts of speech on different days. Using the parts of speech as categories allowed him to relax a bit in those early days, knowing that the answers would follow a pattern. We mixed it up a bit as he committed more of them to memory.

After our vocabulary review, we would create new vocab cards and read the new lesson together. I would read aloud, and Calvin would listen. At least, he listened most of the time. We would also look up new grammar in Henle’s Blue Book. At this point, I read everything aloud, asking questions periodically, or asking him to show me things on the page, just to make sure he was on his toes.

When it came time for exercises, he would read the instructions aloud to me and we would take note of how many steps the exercise contained. Calvin noticed that the instructions sometimes seemed a little tricky, so the two of us had to make sure we understood them before jumping in.

Once again, we have made it our goal to do no more than one hour of any course in a given day. It may seem like after vocab review, creation of new vocab cards, the reading of the lesson, and the reading of the instructions, there is not much time left for the exercises themselves, which is sometimes the case. We regularly curtail the number of repetitions within a particular exercise in order to make sure we touch on most, if not all, of the Latin to English exercises in a given lesson. We will attack the English to Latin translations more as he progresses in his skills and understanding.

One way I tried to help him attend to the Latin concepts more closely during those first few weeks was that I did all of the writing. All of it. He basically completed his Latin exercises orally and I was simply his secretary, recording his work in the Latin A Workspace.

What I have just described was our pattern for the first eleven or twelve weeks. Then, one evening, something really cool happened.

At the end of a very busy day for me, a day in which I had not sat down with him for Latin, Calvin came to me and said that he was not allowed to go play basketball with his friends until his lessons were complete, and that he was not yet done with Latin. Since my wife had left the house for a while, I was on supper duty—sautéing veggies for spaghetti sauce, if I remember correctly.

I told Calvin I could help him, but that I could not leave the food on the stove unattended, so he would have to read it all, and afterward come to me with questions. He sat down across from me at the kitchen island and read quietly to himself. Every couple sentences, he would ask me a question or two to confirm or clarify his understanding.

Once the lesson was read and the instructions understood, the questions became fewer and further between. He sat and did the work, writing in his Latin A Workspace all by himself.

After completing an exercise, he asked me to check his answers. He read the instructions aloud, read the exercise aloud, and read his answers aloud. I am no Latin expert, but I can generally maneuver the first ten lessons of Henle without referencing the answer key, a fact that helped immensely in this scenario.

This may seem like a little thing: Calvin doing his Latin with me only assisting from the side, but let me tell you—I was thrilled. I tried to not get too excited as I watched what he was doing from my side of the kitchen island. You know, I don’t want to be “nerd dad” or anything—getting all excited about Latin—but on the inside, I was turning backflips.

The theme of Challenge A is ownership, and as I made spaghetti sauce that night, Calvin owned his Latin lesson. He was a boy whose only real goal that evening was to play basketball, but Latin was a wall he needed to scale—an Everest he needed to climb—and climb it he did.