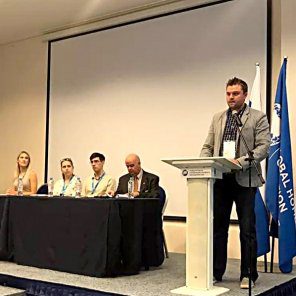 Bortins was a keynote speaker in both cities at plenary sessions titled, “You CAN Homeschool.” She also was a member of panels in workshop sessions on curriculum and content in both cities.

Homeschooling is neither officially encouraged or discouraged in Russia, but it is a rapidly growing movement there.

Classical Conversations is one of the leading sponsors of the GHEC and one of the family education pioneers in Russia with more than 350 students in its tutoring programs in Moscow this past year, the first year CC has been active in Russia, according to CEO Robert Bortins, who also spoke at the conference.

Robert Bortins, son of Leigh Bortins, was homeschooled, K-12, by his mother, which was the genesis for Classical Conversations.

“We don’t know what will come of this GHEC meeting,” he said, “but we see homeschooling growing internationally, and we’re excited to support it in any way that God leads. Leaders from countries all across the globe are interested in bringing CC to their country, and many of them are here at this conference.”

Alexey Komov and his wife, Irina Shamolina, were organizers of the 2018 GHEC. Komov is the CC Director for Europe and Asia, and Shamolina writes CC’s Russian language curriculum. Komov is a GHEC board member and was also a keynote speaker in the “You CAN Homeschool” plenary sessions and at the “Homeschooling Around the World” plenary session in Moscow.

Robert Bortins and Amanda Alphs both spoke at the plenary session, “Homeschool Graduates in their Own Words” on the benefits and challenges of being homeschooled. Mary Alphs also spoke in a workshop session on “Enjoying Community in Homeschooling.”

Leigh Bortins encouraged members of the CC community to check out the citizenGO.org website and sign petitions in support of homeschooling in various countries.

Home education is currently illegal in Germany and essentially banned in Sweden. Parents in these countries frequently face hefty fines, court battles, jail time, and the removal of their children from the home—simply for their decision to teach their children. In addition, a number of countries around the globe seek to limit severely a parent’s right to make decisions about their children’s education. These countries include Bulgaria, China, Cyprus, Greece, Macedonia, the Netherlands, Romania, and Spain.