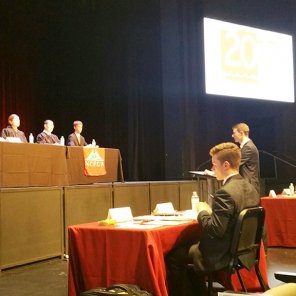 Among those CC students who competed at Stoa’s National Invitational Tournament of Champions May 29-June 3, were two sets of brothers, Tegan and Riley Truitt of Lakewood, Colorado, and Jeffrey and Austin Pistor of Colleyville, Texas.

Jeffrey and Austin won the Stoa national championship in Parliamentary Debate, while Tegan and Riley placed second in Duo Interpretation (all formats).

“I think it’s incredible how well Classical Conversations and speech and debate competition go together,” said Heidi Truitt, Tegan and Riley’s mom. “So many parents think you have to choose one or the other, but they go together so easily. Our family overlaps interpretive recitations, research papers and other speeches every year. Speech and debate makes CC easier, according to my guys, and CC makes them better competitors in speech and debate.”

Jeffrey just graduated from the Challenge IV program at the Southlake—The Hills CC community, while Austin is entering Challenge II at the Bedford North CC community. They both compete with the Speak Out—North Texas speech and debate club.

More than 600 students from around the country competed in the Stoa National Invitational at Union University in Jackson, Tennessee, May 29-June 3.

If you are wondering what Stoa means or stands for, a stoa was a covered walkway or portico in ancient Greece where public gatherings, marketplaces, religious ceremonies and political speeches and debates could be held.

Ben Vincent, a senior from Olympia, Washington, placed first in Apologetics and second in Impromptu Speeches in St. Paul. Ben is a Challenge IV student in the Lacey CC community in Washington state.

Noah Howard of Baton Rouge, Louisiana, placed second in Moot Court at the NCFCA Nationals with his partner, Noah Foster. Noah Howard graduated in May and had completed seven years in CC, ending with Challenge III at the Hammond CC Community.

The National Christian Homeschool Speech and Debate Rankings website lists results from more than 1,100 speech and debate tournaments, including Stoa and NCFCA Nationals, and then ranks almost 2,000 competitors nationally. Again, Classical Conversations students did quite well, placing three students in the top 15 nationwide.

Classical Conversations now has more than 105,000 students enrolled in its tutoring programs, which are provided by almost 2,500 CC communities. CC provides resources, guidance and a community for a Christian home school curriculum using classical education in three developmental stages: grammar, dialectic and rhetoric.