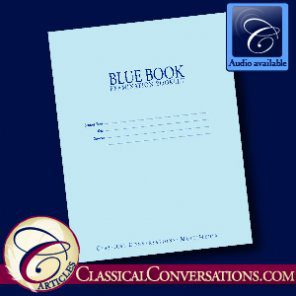 Although philosophy was one of my favorite courses, I was dreading the blue book exam. The study guide alone was overwhelming. We had learned so much! How could I possibly retain all the details? And what was a blue book exam, anyway? Wasn’t that for college kids?

I studied and stressed the week before the exam, cramming and crying. I finally spoke to my Challenge I Director about it. He smiled and told me not to worry.

“I’m actually planning for this exam to be fun,” he said. “You like philosophy, right?” I said I did. “And you’ve been doing the reading?” I had. “And you’ve been listening and talking in class?” Of course! Getting me to stop talking was usually more of a trick. “Then you’re going to be fine.”

I tried to believe him, but I was still nervous when he handed out those pale blue books. “Have fun with this,” he told us again. “Use what you know. Be creative.” He then handed out the typed exam. I took a deep breath and scanned the page.

“Imagine a conversation between Socrates and Locke. How would that go?”

“Which philosopher has influenced you the most? Why?”

“Would you call yourself a empiricist or a rationalist (define)?”

I hardly knew where to start! Eventually, I put my pencil to the blue book and recorded my thoughts. I realized that what we had been learning wasn’t just abstract, textbook nonsense; it applied to real life. What I learned had genuinely shaped my thoughts, my understanding, even my personality. I was different because of what I had learned. I could explain more easily, think more clearly, and discuss more intelligently.

I knew a lot of facts: I knew that Democritus (c. 460 BC) came up with the idea of the atom, what he thought was the smallest building block of creation. I knew that Aristotle thought there were three forms of happiness: pleasure, freedom, and knowledge. I knew that Kant believed in a categorical imperative, that we should behave as if our behavior was setting the standard for everyone.

But my mind had also been stretched and challenged in less quantitative ways, which the blue book assessment honored as well. I was invited to bring my imagination and what God was doing in my heart to the exam. The test I had most dreaded in all my life ended up being one of the most beautiful and profound experiences of my life.

I learned—for one—that I had retained more facts and figures about philosophy than I had realized. I learned that applying knowledge and myself could be an extremely fun and rewarding experience, even if it’s in the form of a test. I learned that “school work” and imagination are far from mutually exclusive.

My friends and I actually talked about the assessment later, just because we enjoyed the thoughts it prompted.

Ever since that fateful day in April 2009, I haven’t dreaded a single blue book exam. Even in my hardest college classes, my mind would drift back to the philosophy exam in Challenge I, and I would smile. Have I done the reading? Have I listened and talked in class? Then I’m going to be fine.

I can say with certainty that “assessing to bless” is a very real thing, and a very real blessing!