Challenge: The Moment You’ve Waited For 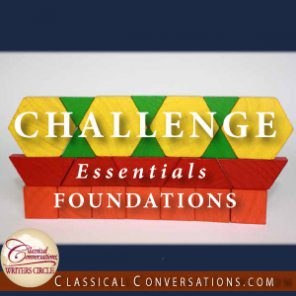 The memory should be specially taxed in youth, since it is then that it is strongest and most tenacious. But in choosing the things that should be committed to memory the utmost care and forethought must be exercised; as lessons well learnt in youth are never forgotten.
Arthur Schopenhauer

When my Challenge II students are discussing the impact of the Industrial Revolution on artists and writers, I tell them, “This is why you learned that song during Foundations.”

When my Challenge II students are wrestling through a new sentence structure in Latin, I tell them, “This is why you learned the sentence patterns in Essentials.”

When my Challenge II students are working on an advanced math problem and making a mistake, I ask them, “What law allowed you to do that?” If they can’t name a law, it probably means they shouldn’t have done it because it’s against the laws of math. Once again, I can say, “This is why you memorized that math law in Foundations.”

There are so many things that students memorize in Foundations and Essentials that don’t make sense at the time. Haven’t we all, at one time or another, questioned the wisdom of having a six year old chant the distributive property? However, each of these pieces of information, while only a catchy song or chant to a grammar student, becomes the stepping-stone to a new realization for Challenge students.

This is the first year my entire Challenge class, with the exception of one student, has been in Classical Conversations since Foundations and Essentials. It gives me unspeakable joy to see them building on the things they learned in those early years.

For those of you who have very young children, this may be hard to see, but it is the beauty of the way Classical Conversations was built. Leigh Bortins, founder of Classical Conversations, started with the Challenge program. Then, after a couple of years, she and her friends realized that these students had gaps in their education. If these gaps were filled in the early years, the students could experience much more success in later years.

For example, take Lesson Six of Henle Latin Second Year. This lesson addresses personal pronouns. It seems like a large amount of memory work to students who are asked to memorize five cases for each singular pronoun and then to do it again for each plural pronoun. Why couldn’t those Romans make it easier, as with English. Then, it’s time to pull out the old Foundations and Essentials memory work. Students who have memorized the nominative pronouns, objective pronouns, possessive pronouns, and possessive pronoun adjectives in English find it easier to see how this works in Latin. The same holds true for students who have mastered the difference between transitive and intransitive verbs in Latin and the students who have learned about the verbals—participles, infinitives, and gerunds.

In Latin class, we are able to puzzle through complex sentences because we know how to label each word in the sentence by its job. Is it the direct object? Then it should probably be in the accusative case. Is it the object of the preposition? Then it should probably be in the ablative case. Is the verb active or passive, present or past? They have already discussed these issues in Essentials. The memorized verbs in Cycle 3 English grammar prepare students to memorize the four principal parts of Latin verbs.

One issue that seems to give Latin students trouble is the subjunctive mood. One of the primary uses of the subjunctive mood is for dependent clauses. Hmm. . . now is the time to pull out those subordinating conjunctions we memorized in Essentials. www.asia.wub clauses anyone?

When students are reading a somewhat challenging book like Gulliver’s Travels, they are struggling to understand the time and place in which Swift lived and wrote. They can pull out memorized information about the Age of Enlightenment and the Classical Period of the Arts to get them started.

So, press on with the memory work, parents of young children. Be confident, knowing that these lessons have been carefully selected, knowing that they will become full-blown and bear much fruit during the Challenge years.