Choosing to Be a Chicken Soup Homeschooler 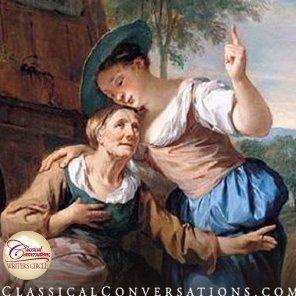 When vats of hand sanitizer magically appear next to every handle, lever, and faucet accessible to the public, it can mean only one thing: cold and flu season has arrived. Despite my best efforts to avoid contamination, sometimes illness is unavoidable, especially if children are involved. For me, a cold follows a predictable, albeit somewhat melodramatic, pattern:

• Day One: steely-eyed determination
I have a plan. Careful self-treatment using vitamin C, rest, and hot tea will return me to health in no time. I am Shakespeare’s Henry V, who “…would not die in that man’s company that fears his fellowship to die with us.”
• Day Two: self-deprecating humor
Yes, I wore socks and sandals when I walked to the mailbox. I might even eat Ramen noodles for lunch. Call it sick-person privileges. I say with Macbeth, “Throw physic to the dogs; I’ll none of it.”
• Day Three: resolute misery
I am too sick to care. Like Richard II, I want to do nothing but “…sit upon the ground. And tell sad stories of the death of kings;…”
• Day Four: panicked exasperation
I will never get better. I do not care that colds are viruses and thus have to run their course. Give me medicine! I will try anything, just CURE ME! I am Richard III shouting, “A horse! A horse! My kingdom for a horse!”
• Day Five: exhaustion and despair
I am doomed; this will never end. I am King Lear, hating anyone who “…would, upon the rack of this tough world, stretch him out longer.”

Of course, contrary to my theatrical rants, a cold does not last forever. By day six, I begin to improve and I realize with chagrin that I now own the contents of a small drug store and have imagined myself in the role of at least five Shakespearean characters within the span of a week. Ouch. At least this reaction is limited to cold and flu season. Or is it? I would argue that teachers, and perhaps homeschool parents in particular, are tempted to react in a similar way when their students are struggling to learn.

As a child, I thought the annual homeschool book fair was a spectator sport. The gates would open and a multitude of parents would rush in like children at an Easter egg hunt. The experienced moms were single-minded; nothing could distract them from their shopping lists. They bought their books and were out the door before the next wave made it past the welcome table. By contrast, many of the newer moms did not have a shopping list. They would buy a little of this and a little of that with a look of anxiety on their faces that said, “Cure me! Make me a successful homeschool mom. Make my child cooperative and smart. I will try anything.” These parents had hit the metaphorical Day Four of homeschooling.

Some homeschool parents never seem to reach that day. They choose a curriculum with specific goals in mind, modify it to meet their children’s needs, and, if necessary, find another option that aligns more closely with their objectives. Other homeschool parents reach that Day Four stage on the very first day. They buy dozens of textbooks and workbooks and computer programs and graphing calculators and how-to books, hoping against hope that in this mélange of philosophies and methods they will find one that transforms them into perfect teachers and their children into National Spelling Bee champions and National Merit Scholars.

Unfortunately for all of us who want a quick cure-all, learning is a struggle that has to run its course. The latest fads may promise instant results, but they are like antibiotics matched against the rhinovirus—they do not reach to the heart of the need. So, what do we do in the face of students struggling to learn? After all, no parent wants to sit idly by when a child is sick.

Allow me to offer an answer by way of a story. I remember “hitting the wall” in calculus not once, but twice. My dad was my primary math teacher at the time, and he and Mom had drilled me in the fundamentals of mathematical thinking, giving me the tools to tackle this new challenge. But I had to put the pieces together. There was no magic calculator my father could use to implant the information in my brain. Instead of throwing out the math book and ordering five new ones, he sat with me in my frustration, offering a bowl of explanations and a dab of humor, much as a mother might offer her sick child chicken soup and a steaming washcloth to battle the symptoms of a cold. At the end of the day, he knew that we both had to work and wait.

In the end, I made it through calculus, but not because I had the best math book or the latest technology on my side. I made it because I had a father who loved math and loved to learn, and who was willing to invest his time sitting beside each and every version of his daughter, from indomitable Henry V to despondent King Lear, while I figured out how to do the same.