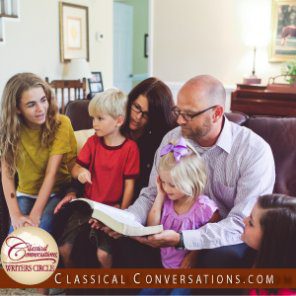 The overarching vision of Classical Conversations is often delineated by the alliterative, threefold focus: Classical Christian Community. For a brief moment, I’d like to zoom in on each “C” in this alliteration.

That’s not surprising, eh? However, although folks are not surprised to hear that we’re classical, they often have questions about what that means. We can say “classical” until we’re blue in the face, but if we cannot explain what we mean by it, the word doesn’t help much. Most folks think that “classical” means we love to wear togas and laurel wreaths, while sitting around quoting Plato and Aristotle. That, of course, is not the case, but what is the answer?

My favorite response to this question is: “We are looking back in order to move forward.”

“We all want progress. But progress means getting nearer to the place where you want to be. And if you have taken a wrong turning, then to go forward does not get you any nearer. If you are on the wrong road, progress means doing an about-turn and walking back to the right road; and in that case the man who turns back soonest is the most progressive man. We have all seen this when doing arithmetic. When I have started a sum the wrong way, the sooner I admit this and go back and start again, the faster I shall get on.”

In America, this “wrong turning” culminated with the implementation of John Dewey’s social and educational philosophies into the public schools. If we want to move beyond the monstrosity of American “education,” we need to assess where we went wrong, go back, and get on the right path in order to move forward. This is what we mean by “classical.”

“Classical” does not mean antiquarian. Older is not necessarily better, but if an ancient practice has been successful for centuries—if it is tried and true—and the current practice has been deemed a failure in less than a century, then perhaps the wise educator would be willing to commit the latter model to the flames and pursue the former post haste. Under these terms, the reinstitution of the classical model is just good science. It is sad that John Dewey’s experiment was implemented on the children of America, robbing generations of Americans of a good education.

So, this is my one sentence summary of the “classical” portion of the CC alliteration: We look back in order to move forward.

I love the word “Christian.” Many rail against it because it doesn’t “mean” one thing, or it’s too hard to nail down its meaning. But, rather than despise a word as versatile as “Christian,” I think we ought to allow it to accomplish all that it can. Here’s what I mean by “Christian”:

However, the word “Christian” is also used inclusively. Christianity includes all those who worship the Holy Trinity (Father, Son, and Holy Spirit) through the Son, Jesus Christ, having been baptized in that triune name. Your particular brand of Christianity does not “get you in” with God. The person and work of Jesus Christ, applied by His Holy Spirit redeems you from your bondage to sin, grafts you into the family of God, forgives your sins, and makes your dead soul alive. His mercy endures forever for all kinds of folks from all kinds of denominational backgrounds. In this sense, “Christian” is also an inclusive term.

This is not to say that doctrine is superfluous, but it is to say that no single denomination is going to have all orthodox doctrines in their absolutely perfect proportions and applications all the time. This is one of the extraordinary benefits of Classical Conversations’ distinctive ecumenism. Classical Conversations wants to be exclusive where God says to be exclusive and inclusive where God says to be inclusive. The One who says, “Do not love the world and the things of the world” (1 John 2) also says, “Love the brethren” (1 John 3).

Which leads us to…

Classical Conversations is a “community.”

We are in this thing together. Neither of the two preceding aspects of Classical Conversations can be, nor were they ever meant to be, accomplished alone. We’ll begin with the latter aspect first: Christian.

Particular Christians live, move, and have their being as particular individuals. I am me; you are you; I am not you; and you are not me. But when we think of ourselves as individual Christians, we ought to think of ourselves as individual members of the larger Christian body, because that’s how God’s Word refers to us (1 Corinthians 12.) I am an individual, but I am not the entire body. I may be an eye and you may be an ear. The point is that we need each other in order to be whole. Christ is the head of this one body for she really is one bride. He is not a polygamist with millions of brides throughout history. God is one God in three persons; Jesus Christ is one Son with two natures; the church is one bride in millions of persons. There has never, ever been any such thing as rugged individualism—either in heaven or on earth.

As Christians, if we see ourselves rightly, we will not despise the brethren by thinking we’re fine on our own, and they’re fine on their own. We will love, serve, and minister to one another. We will use our freedom as individuals for the building up of the body instead of exploiting that freedom on ourselves. We will love our neighbor as ourselves by laying down our lives in service to one another.

Christianity is not meant to be accomplished alone, and neither is classical education. The first aspect that we covered in this essay, “classical,” is nearly impossible to do well in seclusion.

If we define classical education as an education that applies and integrates the three arts of the trivium—grammar, dialectic, and rhetoric—to those same three stages of childhood development, it becomes evident that no one can accomplish this goal well on his or her own.

For more on this approach and a more thorough explanation of “community,” be sure to read Part Two of this article when it posts in the near future.