Classical Conversations Comes to the Rescue 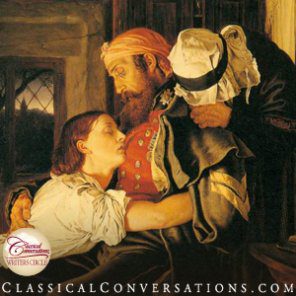 “Are you sure you want to drive this van all the way to Baton Rouge?” This is the question our mechanic asked us when we told him why we were repairing the alternator and rear air conditioning on our 2003 Chevy Venture minivan which showed nearly 230,000 miles on the odometer. “We drive our vehicles into the ground,” we told him. “We’ll get a tow and rent a van if we have to.” Little did we know that our auto mechanic is also part prophet, for this was indeed the final journey for the old, red minivan.

The journey was proceeding quite swimmingly until the transmission kicked out of gear and into a permanent state of “neutral” some twenty miles north of Laurel, Mississippi. While on the shoulder, I checked all I knew to check and called our mechanic for some advice. He advised that we call a tow truck, for it sounded as if the transmission was spent. He was right—we needed a tow—but with seven people in the van we were going to need more than an average tow truck.

Since we were on our way to a Classical Conversations Parent Practicum in Baton Rouge, Louisiana my wife, Jamie, who is an area manager for CC, called the area managers who invited us to come to Louisiana and asked them for advice about how to get out of our little jam. Little did we know the mechanism of mercy that Jamie’s phone call would set in motion. Little did we know the blessing God had in store for us that evening.

Louisiana area managers, April Foster and Becky Logan and Mississippi area manager, Cindy Brock jumped into action and coordinated a rescue that would make the Coast Guard proud, or FEMA, or anybody that coordinates rescues for a living.

April was still at church when Jamie called, so she looked around and asked if anyone had any ideas. A CC dad in her church, Jeff Findley, said he had a car hauler and he would come up to Laurel and carry our vehicle to Louisiana. Our stranded van was over two and a half hours away from this man. He had to go get his car hauler, for he had let someone else borrow it, then drive over five hours round trip to retrieve our van. This man never asked for money, not even gas money. I have never met Jeff, but if you are out there, Jeff, thank you.

With the van taken care of, we needed to get off the shoulder of the interstate. Cindy Brock, the Mississippi area manager, called the local Foundations/Essentials director, Deann Bond, to see if she could help. Deann and her husband, Mickey, dropped everything and drove twenty miles north to rescue us. They brought two vehicles so that both my family and our luggage would fit. We all drove to their church to spend the evening while we waited for our ride to Louisiana. Bethlehem Baptist Church fed us snacks and drinks while my children played in the gym and even participated in children’s choir.

From another CC mom in Hammond, April borrowed a van large enough to transport us  and she began her two-and-a-half-hour trip up to Laurel. She picked us up at the church, pointed the van south, and drove us down to Hammond, Louisiana. While she was driving south, Becky Logan’s husband, David, was driving east to pick us up in Hammond and take us safely to the apartment where we would be staying in Baton Rouge.

When the transmission died, we still had over three hours of traveling under normal conditions. After the breakdown, the entire rescue only took about six hours. Talk about efficiency! Talk about a coordinated effort! Talk about the grace of God poured out on those in need!

April’s pastor knew of a transmission shop and the next morning, Jeff toted our van there. The owner, Terry, inspected our van and confirmed the worst—to repair the transmission would cost far more than the entire van was worth. I told him I would pick it up on Thursday and pay him for his time. Terry refused to charge me for his time. In fact, he found out what the van was worth at a salvage yard, a price very near to the one my mechanic back home told me to expect, and said he would help coordinate the sale. However, since I don’t carry my vehicle title with me, the sale was going to require trust between me and the salvage yard. Either we would have to wait for payment or the salvage yard would have to wait for the title. Instead of going through this hassle, Terry, the transmission guy I had never met previously, paid me in cash and told me to send the title to him. He would work out the sale with the salvage yard.

Instead of paying the expense to rent a van for the whole week, David and Becky Logan chauffeured us every morning and evening back and forth, to and from the Practicum. And on top of all this grace poured out on us, the parents at the Practicum took up a love offering for us which more than paid for the van rental to return home, all the gas, all our food, and then some.

The status quo that God has ordained is for a man to work with his hands and to provide for those under his care, and after them to provide for the members of the household of faith and his neighbors around him. That Sunday afternoon beside the interstate twenty miles north of Laurel, Mississippi, my status quo changed dramatically. My ability to provide ran out. The cell phones still worked, the rear A/C still worked, the motor still ran—for all these we are thankful, but those things, in and of themselves, did not rescue us that night. God had placed his people into a network—a community—of homeschoolers and God quickened those people unto love and good works. As many as were called upon that night, all responded to the call and met our every need.

Jesus Christ is at the Father’s right hand bodily, He is with us in the Lord’s Supper sacramentally, and He is manifest in the millions upon millions of Christians whose hearts, hands, and feet are dedicated to His service. He told His disciples to wash one another’s feet as He had washed theirs. That week in Mississippi and Louisiana, many a follower of Jesus took off their outer garment, wrapped it around their waist, and knelt down to wash the feet of the Hays family.

Jamie and I will never forget all that was done on our behalf, but more than this, I am assured that my children will never forget. More than all the physical needs that were met, I am thankful for this real-time example to my children of the church of Jesus Christ rising up to care for our needs. I trust that these temporal acts of God’s people will have eternal effects in my home. Thanks to everyone who helped.