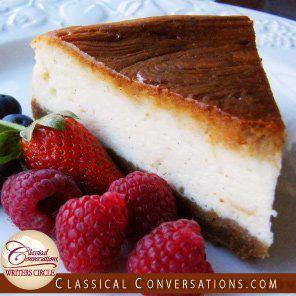 I recently asked a group of young children at Foundations Orientation if they wanted to learn how to make cheesecake. Always ready for an adventure and primed to have snack time sooner rather than later, they enthusiastically agreed. “So, what do we need to get started?” I asked. Answers were abundant, and eventually we sifted through them and decided that, first, we needed a recipe. The ingredients suggested might surprise you: cheese (cheddar, maybe?), crackers, ketchup, and candy bars, along with the more expected eggs, sugar, and butter. We also determined we needed some tools, such as a mixer, a spoon, a measuring cup, and a pan.

“Ok,” I said, “So now that we have all our “stuff,” we are done making cheesecake, right?” A chorus of groans greeted this assessment. They protested that we had not DONE anything yet! We had not used the tools and the ingredients had not even been mixed together. So, I assented to the notion that we still needed to work a bit more; we should definitely use all the tools and mix the ingredients. Then we would be finished. But no, it appeared my sous chefs thought we needed to bake the cheesecake in order to really finish the process. Therefore, I asked, “After we bake it, then we are done, right?” Well, here is the thing: These guys had been thinking about cheesecake for quite some time. You might say they were really invested in the cheesecake; they did not just want to make it and bake it, they wanted to eat it! One little guy said, “What’s the point of making it if we don’t get to taste?!”

Actually, parents, this is the question I would ask you: What is the real point of Foundations if you are not going to stick with it through Challenge?

In the early years, the eagerness to learn new words, ideas, songs, and facts is almost its own reward. Our students learn so much so fast and they are so thrilled with their newly acquired knowledge, but as they grow, they want to do more. They begin to ask how and why, not just who, what, where, and when. They want to use their knowledge and they want to understand how all those facts add up; they are eager to make sense of their world. They want to impact that world!

They want to eat the cheesecake.

If we only pursue Foundations, we pull our students away from the learning process just when it gets interesting, just as the ideas are beginning to gel. The Foundations program is meant to build a firm base for subsequent intellectual growth and development. The reason construction engineers build a foundation is so that the structures erected later will have secure footings. The Foundations program was begun to equip our students to think the “Challenge thoughts” well, being prepared with the groundwork knowledge that would allow them to explore the deeper thoughts behind the facts.  Our students deserve the opportunity to finish what they start, to celebrate the end, and not just enjoy the means.

They deserve the cheesecake!