Classical: The Easy Way (How the classical model makes Latin and science easier)

I just had a conversation with my fourteen year old daughter. She has been in Classical Conversations since she was six years old. She has heard me talk about the phases of learning for nine years now. She has heard me explain that whenever you learn something, you first have to memorize some facts and vocabulary, and then you can understand and use the knowledge in sorting, comparing, analyzing, or conversing with it. She did not really understand this until today when a light bulb finally went off.

She came to me to complain about Latin homework. Her complaint was that I had assigned all the translations to be done at the end of the week. She thought it would be better to spread them out over the week. What I had asked her to do the first half of the week was to copy a chart of verb endings several times. I had asked her to do the grammar level work first: memorize the verb endings. Then, after the endings were memorized, the translating would be a piece of cake. She could do the translating much more quickly and easily if she already knew the endings! (Perhaps she was surprised that I was actually trying to make her work easier, not harder.)

If she had done the translations first, then memorized the verb endings afterward, her work would have taken much longer because she would have had to keep looking up endings while she was translating sentences.

Translating is a dialectic activity. She has to know the grammar (vocabulary and verb endings) in order to identify the part of speech of each word and its meaning, and then understand what the sentence is saying. 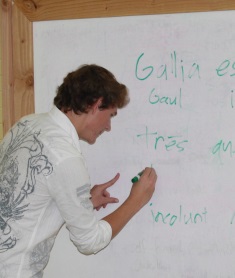 Dialectic activities are much easier if you have done the grammar work first. That is what we mean when we say we are teaching “classically.” We know to memorize the grammar first, and then try to understand it. The third part of the trivium should wait until the first two have been done. That is the part when I ask her to teach the class the concept, write an original paper on the subject or have a meaningful conversation about it.

This is true for any person learning any subject; therefore, I consider it to be a “natural law.” Gravity is a natural law. It applies to everyone. The trivium, as I described it, is also a “natural law.” Applying it will make your work easier whether you are a student or a teacher.

I came across another example of the natural law of the trivium in our science work. I looked through the chapter on motion. It described trains traveling and balls falling and all kinds of wonderful things that move. It described their motion and followed with long math problems to find relative velocity and acceleration. I realized, using the “law of the trivium,” that their understanding of the chapter would be easier if they memorized the grammar before they began reading. I wrote three short equations on the board. I did not work any problems or do any examples. I told them to memorize the equations first, then we would talk some more. They memorized, “speed equals distance divided by time” and two other key equations. Later, when they read about a train travelling a certain distance in a certain time, they knew exactly what to do with the numbers and they grasped the concept quickly and easily.

I have to admit, this was the first chapter in which I had to assign memory work. Up until this point, the students already had the grammar memorized; they had learned it during Foundations. The science terms had been memorized with songs and chants when they were younger, so when they read a text using those words, they find them easy to understand. In fact, the next three weeks of Challenge I science is dealing with Newton’s Laws of Motion. These laws are in the Foundations memory work, so students already have a good foundation of grammar for those chapters. Understanding the text will be easy and probably enjoyable for them because they know the words already! 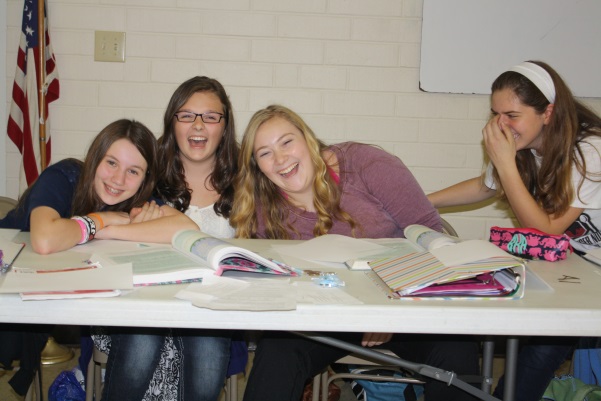 There is one more issue that I had to discuss with my daughter concerning her classical education. She had been thinking that the goal of homework was to have a sheet of paper full of translations by a certain date. The paper is not what I care about, although I do expect it to be done. What I care about is what is actually in her head. This is a significant difference between classical education and modern education. We want our students to be masters of a subject: able to talk about the subject the day of the final and a year later and ten years later. In my education, I got an A if I could remember some facts long enough to pass a multiple choice test and forget it all the next day. That is what I mean by a “modern” education, and I want my children to have a better education than that.

I helped my daughter see that the classical method really is the easy way to master a subject.

Note: If your student is in Challenge, but did not go through all three cycles of Foundations memory work, you can purchase a CD with all the memory work spoken or sung, and they can listen to the CD and effortlessly learn some foundational grammar for their Challenge work.