Dispute, Deny, Distort, Discard: The Constitution in the Crosshairs 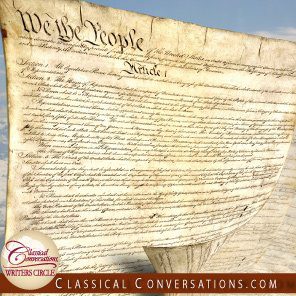 Satan tried it first1. Dispute: “Did God really say?” Deny: He didn’t really say that. “You will not certainly die.” Distort: Here’s the real truth. “God knows that when you eat from it … you will be like God, knowing good and evil.” And the final result? Adam and Eve discarded God’s words. Dispute, deny, distort, discard.

Once Adam and Eve were no longer grounded in God’s ideas, what did they have to fall back on? Their own wisdom. They did what was right in their own eyes. And history continually reminds us that this is a recipe for disaster.

Surely we would never fall into that trap!

Even the casual observer will recognize that our culture is losing—more likely, has lost—its basis for Truth. There can be no doubt that our country was founded on biblical principles. During the early days of our country, the preponderance of America was Christian. Even if not all were religious, there was at least a pervading belief in the rightness of biblical principle. This foundation in biblical principle helped steer our culture down the morally right path, whether in government, the courts, the public square, business, or private homes.

Did God really say that we should not murder? He did not. What he really meant was that we should not execute criminals. The real truth is that this mandate does not apply to the unborn. After all, the unborn are not human. Dispute, deny, distort. Hence, God’s principle that protects unborn children has been discarded.

Did God really say that homosexuality is a sin? He did not. What he really meant was that homosexual acts of lust are sinful. The real truth is that monogamous, loving, homosexual relationships are pleasing to God. Dispute, deny, distort. Hence, God’s mandate against sexual immorality has been discarded.

So, our biblical foundations have been discarded. What now? What do we fall back on to guide us through life? Perhaps our founding documents? Yes, those will guide us in our decision making! The founding documents will be our final authority and all will be well.

The insidious, slippery departure from biblical principle has brought with it an unintended consequence. When we discarded God’s Word, not only did we eliminate His precepts, but we also abandoned the idea that man answers to a higher authority. The idea that there is a Truth higher than our own, that man is not the final authority was thrown under the bus.

If we can discard the standard upon which our Constitution was written, what is the next logical step? What will stop us from discarding the standard that remains, in order to live by our own wisdom? We have discarded the Bible, so why not also discard the Constitution? After all, the latter was built on the former. Of course, we would not expect to hear anyone advocating the abandonment of our Constitution. Then again, we would not have expected to hear anyone advocating the abandonment of the Bible. The process of discarding our Constitution is occurring in the same manner that Adam and Eve discarded God’s words.

Do our founding documents really acknowledge a right to life, the free exercise of religion, the right to pursue happiness, the freedom of speech? They do not. Hence, we can legalize abortion, because “right to life” really means that biological parents have the right to responsibility-free life.

When Elane Photography in Albuquerque refuses to photograph a gay dedication ceremony, thereby exercising their religion, they should be forced to photograph these events in the future or face jail time. This suppression of religious freedom is the “price of citizenship” (says the New Mexico Supreme Court Justice). And when North Carolina’s Love Wins Ministries is distributing food to the homeless in a public park, they should be forced to cease and desist or face jail time. After all, “religious freedom” really only applies in the church building, not in the public square.

If a child in California or New Jersey struggles with gender confusion issues, the government now says it is illegal for a professional counselor to attempt to restore peace in that child’s soul. After all, pursuing happiness is really only valid if your definition of happiness agrees with the one outlined by the government.

The Department of Justice can distribute an internal memo directing employees to verbally acknowledge homosexuality as a valid lifestyle, because “silence” on the matter “will be interpreted as disapproval” 2. And an Army Chaplain’s Aid, as well as an Air Force Senior Master Sergeant can be threatened with discharge because they made the unconstitutional mistake of speaking their opinion on the gay marriage issue. After all, free speech really only applies if it conforms to cultural norms.

Dispute, deny, distort. And now, even our Constitution is in the crosshairs, ready to be discarded.

The recipe is tried, tested, and successful. Unfortunately, the success of this recipe spells disaster.

We have abandoned our biblical foundations by disputing, denying, distorting, and finally discarding God’s principles. We have fallen back on our own founding documents as the yardstick by which to measure right and wrong. In the interim, we have also succumbed to the attractive idea that man is the ultimate authority, autonomously knowing good and evil. Hence, we are now disputing, denying, distorting, and finally discarding our own founding documents. What is left for us to fall back on now? Our own wisdom? Unfortunately, yes. But how many times throughout history has man done what was right in his own eyes?

Can we reverse this trend? Yes. My theory is this: at some point in the near future, the increasingly outrageous anti-biblical and anti-constitutional incidents occurring in our country will force Christians out of their complacent woodwork and into the spotlight. When the number of blatantly blasphemous events (laws, court decisions, and so on) reaches its climax, the content citizenry will become discontent. Then, the public outcry will drown out the immoral minority. In addition to this, I firmly believe homeschoolers will be a significant influencing factor in the reversal of this trend. Our children will be the ones on the front lines, standing for Truth, for biblical principle, and for constitutional adherence.

We must continue teaching God’s principles to our students day and night, when we sit at home and when we walk along the road, when we lie down, and when we get up3. We must persevere so they will be girded with the belt of truth, the shield of faith, and the sword of the Spirit4. The battle they will face is not against flesh and blood, but against spiritual forces of evil5. Fortunately, we know our enemy, and his tactics have not changed since the beginning of time. Our biblical foundation has already been discarded, and the sooner we recognize that our Constitution is now in the crosshairs, the more ready we will be for this next battle. Battle by battle and with God’s help, we will regain the ground we have lost and win the war!