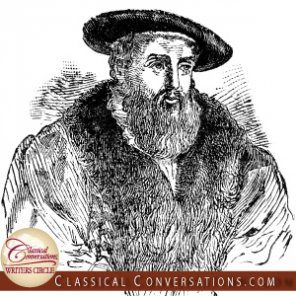 How do we “do science”? What tools has God given us to understand His creation? Where do we begin our search for knowledge? How do we know when we have arrived at truth? That’s a bunch of questions all at once, I know. Instead of giving you as many answers in a list, I offer you a story—a true story.

Once upon a time, there lived a man named Johannes Kepler. He loved God and math. At first he wanted to be a minister of the church, but he later decided to train as a math teacher. Eventually, his passion for math led to a job as an assistant to a scientist named Tycho Brahe. Tycho served as a royal mathematician to Emperor Rudolph II of Bohemia. Tycho’s passion was astronomy, creating very detailed records of the night sky. When Tycho Brahe died in 1601, Kepler inherited all of his astronomical data as well as his position in the royal court of Emperor Rudolph.

Although Kepler lived over 400 years ago and some medieval misunderstandings about the universe remained intact, his world was not flat. Although the earth appears flat, experience teaches us that the earth is indeed a near spherical shape. Both mathematical and scientific hypotheses, as well as the physical circumnavigation of the globe had long laid the “flat earth” legend to rest. However, some legends based on human experience still ruled the day. One such legend was that the earth sat stationary in the center of the universe while everything else—sun, moon, and stars—revolved around it. This was long held to be the case and it was a legend that would not go down without a fight.

One hundred years before Kepler lived, an astronomer named Copernicus had proposed that the sun was in the center of the solar system. He was right, of course, but for many years very few believed him. Along with the long-held belief that the earth was in the center of the universe, everyone thought that the planets orbited the earth in perfect circles. Although Copernicus was right about the planets’ orbital relationship to the sun, he still believed that the planets’ orbits were perfect circles.

Since the time of Aristotle, who lived 400 years before Christ, everyone believed that the planets’ orbits were circular. In his book, Galileo, Mitch Stokes summarizes this view of the universe:

At its most basic, Aristotle’s universe is spherical, the earth resting comfortably at its center. The universe’s outer boundary is an enormous crystalline sphere in which the stars are embedded. This outer sphere—this bejeweled hamster ball—is emphatically not at rest; it rotates at a dizzying speed, completing its journey once every day.

However, in the seventeenth century, in spite of a 2000-year-old misunderstanding of the universe, Johannes Kepler changed everything. Kepler speculated that the ellipse would better interpret the planets’ orbits than the circle and he was right.

What was different about Kepler? Why was he able to question 2000 years of astronomical tradition, invent a new way to interpret the universe, and then mathematically demonstrate his hypothesis?

Johannes Kepler recognized and used both the mind’s ability to calculate and the sense organs’ abilities to accurately perceive the world. Many brilliant men throughout history had esteemed one or the other too highly. Some scientists would emphasize the acts of the mind to the neglect of what their sense experiences told them, while others’ approach was the exact opposite, emphasizing the senses to the neglect of the rational mind. Kepler exercised both his mind and his senses. As mathematician Morris Kline states,

Although [Kepler’s] fertile imagination triggered the conception of new theoretical systems, he knew that theories must fit observations and, in his later years, saw even more clearly that empirical data [sense perception] may indeed suggest the fundamental principles of science. He therefore sacrificed his most beloved mathematical hypotheses when he saw that they did not fit observational data, and it was precisely this incredible persistence in refusing to tolerate discrepancies, which any other scientist of his day would have disregarded, that led him to espouse radical ideas.

One time, Kepler hypothesized that five, beloved, geometrical shapes—known as the Five Platonic Solids—would each fit inside the orbit of each known planet. He tested the shapes against the data he had observed and found that he could not make them fit, so he abandoned the idea even though he loved the hypothesis dearly. Another time, Kepler hypothesized that the relationships of the planets’ orbits would match the relationships between the notes of the major and minor scales of music theory. After months of calculating and comparing, he found that he was right. He wrote an entire work on this entitled The Harmonies of the World.

I will end this article back where I began, by asking a few questions:

What tools has God given us to understand His creation? God has given His image-bearers two indispensable tools. One tool is a rational mind that can accurately interpret the world around us. The other tool includes our five sense organs that accurately perceive the world around us. (These are in no particular order, for one is not more important than the other.)

Where do we begin our search for knowledge? We begin where Kepler did, using both our minds and our senses. We may hypothesize with our minds, then see if the data fits; or we may collect data, then create a general concept that best interprets the data.

You may be asking yourself, “Where is God in all this?” The answer is that He is right where He has always been, in the midst of all of it. He created it all, He sustains it all, and He gifted us with minds and senses so that we can correctly perceive and interpret it. This fact was not unknown to Kepler, for as I stated above, he not only loved math, but he also loved God. Here is one example of Kepler giving all the glory back to God in a way that only Kepler could:

The wisdom of the Lord is infinite; so also are His glory and His power. Ye heavens, sing His praises! Sun, moon and planets glorify Him in your ineffable language! Celestial harmonies, all ye who comprehend His marvelous works, praise Him. And thou, my soul, praise thy Creator! It is by Him and in Him that all exists. That which we know best is comprised in Him, as well as in our vain science. To Him be praise, honor, and glory throughout eternity.