Don’t Walk Away from the Past 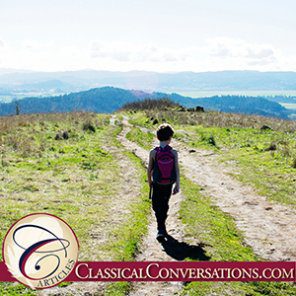 A few weeks ago life for me turned upside down. My family and I were in Athens, Greece at the time. I had moved to Athens to study Greek, and then we received the call no parent wants to receive.

My son had nearly died when the vehicle he was driving flipped six times on interstate 70 just east of Denver, Colorado.

My wife was on a plane to Denver within hours. My girls and I stayed behind to quickly settle our affairs in Athens. We left a day later.

By the way, the Classical Conversations community in the Denver area has been amazing. Thanks to all of you.

A funny thing kept happening to me while we were in Greece. As we met people, they would naturally ask what I did for a living. My response was always the same. “I teach Latin online.”

This response stunned me. Not one person ridiculed my dedication to studying the Latin language.

I am not used to this kind of response. In fact, I am used to the exact opposite.

The American response goes something like this: “What? Who in the world speaks Latin? Why do students need to learn Latin? Does anyone learn Latin anymore?” Usually, there is a fair amount of ridicule tossed in.

Before I can respond (I don’t even bother anymore), the conversation moves on to politics or the latest football game.

The process took my wife and I deep into Greek bureaucracy. When that proved fruitless, we ended up in the office of an Athenian lawyer.

Naturally, he wanted to know why I wanted to stay so long in Athens. “I have mastered Latin,” I responded. “Now, I want to master Greek.”

He raised his eyebrows. “I’m afraid that will take you a long time, my friend.”

The stark contrast brought something home to me. Americans’ connections to our roots are shattered. We really have forgotten where we have come from.

If we could go back two hundred years in the United States, I believe we could have the same conversations that I was having in Europe. After all, Latin and Greek were part of a good education back then. Patrick Henry knew Latin. Thomas Jefferson knew Latin and Greek. I could go on. Latin and Greek played a significant role in early American education.

Homeschooling is not easy.

Then, someone comes along and tells you that you must add Latin.

It takes nerves to push on when everyone is making fun of you. Just remember this. You’re doing a good thing. You’re not alone. America may have forgotten what a good education looks like. But, that doesn’t mean that everyone has forgotten.

Perhaps Europe has walked away from much of its Christian heritage. Perhaps not. I grew up over there. I see things a bit differently. That’s a debate for another time. One thing is for sure. The Europeans see the value of what you are doing.

The Founding Fathers would see the value of what you are doing.

So do I. Ignore the ridicule. Push on. You are not alone.