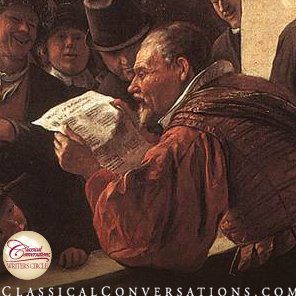 WARNING: Before you read this article, please know that if you proceed you will inevitably become acutely aware of something that will, henceforth, continually unsettle you. If you are prepared for that eventuality, then read on.

A few years ago, my family and I were traveling through Oklahoma City. Being from the small town of Enid, we make it a point to hit the “big” stores whenever we get the chance. As such, we were making our regular pilgrimage to Target to stock up on the necessities. After what seemed like hours of shopping (actually, it probably was hours of shopping), my youngest son and I decided to mosey over to the Starbucks located within the Target Superstore. What happened next changed my life.

As we sat there rubbing our tired feet, I noticed two young ladies sitting at a table near us. They appeared to be in their early twenties and they were obviously employed on the premises, judging by their Target uniforms. I was not eavesdropping—at least not on purpose—but while we sat there, I could not help overhearing part of their conversation. As I began to tune in, I realized that I needed to take action. So, I pulled out my iPhone and set the stopwatch. I timed them for one minute. Then, I did it again. After the third time I was convinced I had enough data points to craft my theory. Here are my data points and the theory I developed from them:

• Within the span of three minutes, these two ladies improperly used the word “like” SIXTY times—an average of twenty times per minute.
• Doing a bit of math, I realized that speaking the word “like” takes approximately 0.5 seconds. Therefore, they were using approximately ten seconds of each conversational minute regurgitating an unneeded and improperly used word. Assuming they each spent a total of three hours daily in conversation, this would mean that each day they wasted a total of three solid minutes improperly speaking the word “like.” Over the course of a month, 1.5 hours would be wasted. Over the course of twenty years, 360 hours would be wasted! Over a lifetime, 1,260 hours would be wasted!
• THEORY: Using the word “like” improperly will ruin your life.
While the little scientific experiment just accomplished is obviously tongue-in-cheek, the point should be apparent. Twenty times in one minute? That is ridiculous. However, that observation set me on a path (or perhaps a warpath) to eradicate the word “like” from the vocabularies of my children and my Challenge II students. How? How could I change an ingrained habit that was so commonplace to the students that they were thoroughly unaware they were even doing it? My first attempt met with only mild success.
As a Challenge II Director, I was accustomed to pushing the students to use similes in their papers. Knowing that a simile is a correct way to use the word “like,” I realized that the improper use of the word equated to a truncated simile. Hence, I decided to speak the word “simile” every time I heard a student improperly use the word “like.” Here is an example of a typical classroom conversation at that time.

Student: “OK. So. I was reading through the Screwtape Letters, and, like…”

Student: “Um, OK. So, I was reading the Screwtape Letters and I noticed, like…”

I explained to the students that I would speak the word “simile” every time they spoke the word “like.” While this worked for a time, I began to notice that the students were getting a bit distraught whenever I chimed in with “simile,” so I decided to abandon my method. But I could not stop now. The episode in Target drew me into a compulsion—an obsession—with eradicating the truncated simile. I was now keenly aware of and intensely in tune with my surroundings. I could hear the word distinctly whenever and wherever it was used. It haunted me. It plagued me. I needed to, had to make it go away. Consequently, I changed my tactics and found success!

One day, I showed up to class with forty-five strands of Mardi Gras beads and five dollars. I explained to the kids that each student would be given five strands of beads to be worn about the neck (I had nine students). The five dollar bills would be taped to the whiteboard. Any time a student heard the word “like” come out of anyone’s mouth, that student could cry out “BEADS!” The first one to cry out “BEADS!” became the recipient of one strand of beads hanging around the perpetrator’s neck. The infraction was punishable by fine even if the word was used correctly. I did not care. At this point, I hated the “L” word so much, I just could not live with it! After lunch, the stakes went up. After lunch, if anyone was caught speaking the “L” word, they would have to give up half of their remaining strands. At the end of the day, the student with the most strands of beads won the five dollars. We called this the “Like-Beads Game.”

Week one, almost no one cried out “BEADS!” They were all so used to hearing that ugly word, they had no idea if or when it was used. Oh, but I did! By the second week of our Like-Beads Game, the students began to listen for the word. As time went on, not only were they listening for other students to say the “L” word, but they were listening to themselves to ensure they did not speak the evil word. By the fourth week, mayhem in the classroom had ensued. I was willing to accept a bit of disruption, if only I could rid them of the malevolent, linguistically deficient, bane of my existence. To restore some order, I created a “no beads zone” around the podium, so that students reading papers to the class could not be accosted by the cries of “BEADS!” It was working!

There were two additional, unexpected benefits as well. In the process of trying to catch other students speaking the “L” word, the students were actually listening to each other. Not only that, but in an attempt to avoid being penalized for speaking the “L” word, the students were trying to check their own speech, which meant that they were now thinking before they spoke. They even crafted new and creative ways to avoid using the word “like” in its correct manner! Instead of, “I like this book,” they would now say, “I appreciate the value of this book.” WOW! They were listening to others, thinking before speaking, and carefully crafting their words. Whooda thunk it?!

By the end of two semesters of this game, the students were essentially liberated from this cruel form of philological slavery. The truncated simile was eradicated from their vernacular! And it only took a year!!

Since I moved up to the Challenge III level with my students, I had the luxury of playing the game for a second year. However, a very interesting phenomenon occurred at the beginning of the second year. Interest quickly faded. The game was no longer interesting to them. Now, each week, I bring the beads and the money; but the beads sit in the bag, and the money stays taped to the board. The students have tired of the game. I am not sad about this for four reasons:

1) I am saving five bucks a week.
2) The word “like” is very seldom heard in my classroom.
3) The students listen better, and they continue to think before they speak.
4) The other Challenge classes have started playing the Like-Beads Game!

SUCCESS! But at what cost? Well, five dollars per week for thirty weeks equals $150. Divide that by the number of days in thirty weeks and you get 72¢ per day. That—in my mind—is a small price to pay for eradicating the truncated simile. And, if I take into account all nine students, the price was only 8¢ per student per day! Just imagine. If we could rid all our Challenge ranks of the despicable, reprehensible “L” word, we would immediately have a huge advantage over our non-Challenge peers. Our students would stand out at every college interview and at every job interview. As soon as they open their mouths to speak, everyone would sit up and take notice, because these kids would speak intelligently, efficiently, and correctly. Perhaps most importantly, they could be spending that extra 1,260 hours impacting the culture, while their counterparts are busy saying “like.”