Finding the Right Words for Christmas 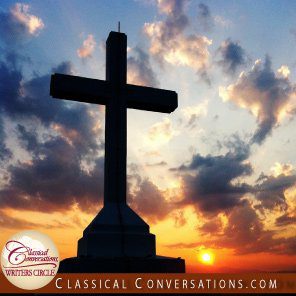 It has been a cold December day and I am sitting inside wishing for a fire to warm my hands. A pot of chicken broth is bubbling on the stove. Tonight, as I chopped vegetables and threw handfuls of herbs into the pot, I thought about the flavorful liquid that comes from bones and gristle. I could use this soup as a metaphor—a word picture—for being tough and nurturing at the same time, or for finding hope after difficult times. Each of those things is similar to the broth that is made from chicken bones.

When we are at a loss to describe something—motherhood, loss, grief, joy—we naturally compare the abstract concept to something familiar and tangible, such as chicken soup. A metaphor is simply a formal comparison. Metaphors are implied rather than explained using the words “like,” “as,” or “than.” Explicit comparisons are called similes. The difference is easy to remember if you tell yourself that similes tell you the similarity outright. Let us pause to practice using these two new words.

Metaphor: “…as he saileth in his many-benched ship over the wine-dark sea…”1

Simile: “…as he saileth in his many-benched ship over the sea that was as dark as wine.”

Simile: “But, look, the morn, like a walking man wearing a russet mantle, comes over yon high eastern hill.”

Metaphor: “America has tossed its cap over the wall of space.”3

Simile: “America has entered the space race and cannot quit now, like a boy who has thrown his cap over a wall and must retrieve it.”

As you may have noticed, metaphors are more concise and subtler than similes. They use precise, vivid, and varied language. The reader must discern the connections for himself. That work of reading is why we remember the “wine-dark sea” of Homer’s The Iliad and the “morn in russet mantle clad” of Shakespeare’s Hamlet. (I hope you will not remember my hastily composed similes!)

A contemporary English translation of the passage from Hamlet renders it, “But look, morning is breaking beyond that hill in the east, turning the sky red.”4 The sense remains the same, but the poetry is lost. We have all seen a sunrise, but the picture becomes less vivid without the metaphor. The mystery is lost. If we set aside metaphor, and even simile, how can we hope to explain those things for which we (and our listeners) have no frame of reference?

As Classical Conversations prepares for the 2014 Parent Practicum theme, rhetoric, I am excited to spend the next few months focusing on figurative language like similes and metaphors. Rhetoric is the art of communicating truth persuasively. Metaphors and similes bring abstract truths into our world in a way that we, and others, can understand. Words take on flesh and dwell among us.

I chose those four precise words carefully to illustrate why Christmas is the perfect time to talk about metaphors. What better time than when we celebrate one of the most mysterious, unfathomable moments in human history? We have to use metaphors in order to understand it. Without word pictures, the Incarnation is too miraculous to express. Here are a few of my favorite metaphors used to explain the Christmas story:

1. “The people that walked in darkness have seen a great light: they that dwell in the land of the shadow of death, upon them hath the light shined” (Isaiah 9:2).

Death does not cast a visible shadow, but the experience of death reminds us of the shadows that appear when the sun goes behind a cloud. The moment when the sun breaks out from behind a cloud is familiar, too. The author of Isaiah uses this metaphor of light and darkness to help his listeners understand what the coming of God will be like.

Authorship was a relatively new concept in Europe during the Renaissance. The first use of the word “author” as a verb dates to the 1590s. Renaissance society, fascinated with the individual, began to give equal status to the person who wrote an essay as they gave to the ideas in it. Individuals were held accountable for their writings because they owned the words. When Ben Jonson compared Christ to an author, he was assigning ownership of life and light to the baby born that night.

The Brontë sisters (remember Charlotte, who wrote Jane Eyre, and Emily, who wrote Wuthering Heights?) grew up alongside the British Empire. In the 1800s, the East India Company was flourishing overseas. England’s empire was growing while others—French, Dutch, Portuguese, and Ottoman—were in decline. Empires organized the world and broke it into small pieces. When Anne imagined salvation, she pictured a great, cruel empire forced to give up its territories.

Have you ever struggled to find the right words to describe something delicious or disgusting? “It’s like…it’s like…” we stammer as our brains struggle to make a comparison to the familiar, the known. Whether we practice recognizing and building metaphors or not, we do use them. And while knowing how to turn chicken soup into a metaphor may be unimportant, when it comes to finding the right words for Christmas, a faithful metaphor can make all the difference in the world.