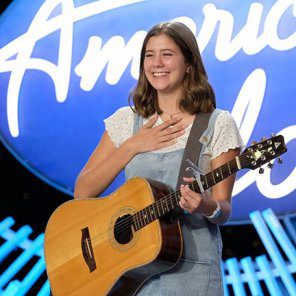 A Challenge student from Acworth, Georgia, will be performing on the Season 18 premiere of American Idol.

Camryn Leigh Smith, 16, daughter of Brandon and Kim Smith, will be featured on the show Sunday evening, Feb. 16, 8 p.m. EST, on ABC. Camryn will be auditioning first on the show, according to her father.

Camryn has an older sister and brother and a younger sister. She attended Challenge II last year at the Mars Hill Monday community of Classical Conversations in Kennesaw, Georgia, and has taken a year off to pursue her music.

Although ABC would not release any information about Camryn’s performance before Sunday evening, we spoke with her mother about Camryn’s interest in music.

“She has always loved music, and she’s not shy about performing,” Kim said of Camryn. “She has such a bubbly and fun personality. She auditioned for The Voice when she was just 14!”

Camryn has been performing for about six years. She sings and plays the piano and guitar and enjoys playing worship, soul and pop music. She and her whole family lead in music worship at their church.

Her favorite subjects in Challenge II were history and debate, her mom said. Camryn’s favorite aspect of CC—not surprisingly—was its sense of community, getting to make new friends and spend time with them each week. In her spare time, in addition to playing music, Camryn enjoys travel and thrift shopping.

The Smith family has been involved in CC for 10 years, and Kim has served as a tutor, a Foundations & Essentials Director, a Challenge Director and a Support Representative during that time.