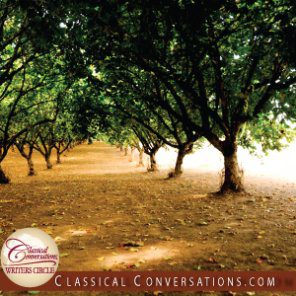 In the old movie, A Man Without a Face, a young man is trying to get into a prestigious military academy. In order to do so, he must pass a rigorous entrance exam. He has previously failed the test, and is concerned that he will fail again. To ensure success, he seeks the help of a reclusive former Latin teacher, played by Mel Gibson. Reluctantly, the teacher agrees to help.

During one scene in the movie, the two of them are climbing a steep, wooded mountain trail. As they climb, the teacher speaks Latin. His young student translates.

Though I didn’t think of it years ago when I first watched the movie, I now wonder why the producers had the actors translating Latin outside. Why did that scene take place in the woods? Was it intentional, or was it a coincidence?

Maybe it doesn’t matter. Personally, I can’t think of a better place to learn Latin.

Latin is one of the toughest subjects your kids are going to learn. Chances are, you already know this. So do your kids.

In March of 2016, after almost twenty years, I left the classroom. I had worked in good schools. I enjoyed my students, and I enjoyed working with the other teachers. But, there’s just no way around it. Modern schools are minimum-security prisons. Students are herded into classrooms, managed, regulated, and disciplined. Then, the bell rings. Students are herded to the next classroom. Day after day, month after month, year after year the process repeats. I don’t believe it’s the fault of anyone in particular. It’s simply the way this system works. It’s all chillingly similar to the prison system.

Every Friday, I would come home stressed and exhausted. To recover from my time in the classroom, I would spend as much time outside as possible. I didn’t know why being outside helped me. I only knew that it did. In fact, the more time I spent outside the easier my job was.

During a financially difficult period, I took a job at a local apartment complex. It was my duty to keep the grounds clean. I would trim hedges, rake leaves, blow the parking lots, and clean debris after storms. Unlike my classroom job, this job required me to spend all of my time outside. Also unlike my classroom job, this job did not cause any stress. On the contrary, it relieved stress.

Not long ago, a friend of mine gave me a copy of Christopher McDougall’s book, Natural Born Heroes. You may have heard of McDougall before. He wrote the famous book Born to Run. I knew that time outside was affecting me in a positive way. But, I really wasn’t able to articulate it.

Christopher McDougall did. There’s an interesting paragraph in chapter 28.

So if you think sunsets and seacoasts are just pretty views, the researchers concluded, you’re making a big mistake. “Simple and brief interactions with nature can produce marked increases in cognitive control,” they explain in a paper for Psychological Science called The Cognitive Benefits of Interacting with Nature. “Treating that ocean front hotel room as merely an amenity” they add, “fails to recognize the vital importance of nature in effecting cognitive functioning.”

Perhaps this is why Charlotte Mason calls us to consider a new rule of life in her book Home Education. “Never be within doors, when you can rightly be without.”

When I’m reading something particularly difficult in Latin, one the best things I can do is get outside. I will go on a hike, or I will go for a bike ride. Often, when I return to Latin, I’m able to break through a difficult paragraph.

If your kids are learning Latin, I would suggest that you let them read outside. If that doesn’t work because they need access to online dictionaries, just cut them loose for a little while when their lessons are over. Latin is a mentally exhausting subject.

At one point in the movie, the reclusive Latin teacher catches his student in plagiarism. For a few moments, the student denies it. When he admits it, the teacher gives him a Latin ultimatum.

Either learn, or get out.

Perhaps, we could shake the quote up a bit. Since nature has such a positive effect on our minds, maybe we should say:

To learn, get out.