Help! My kid wants to support the wrong side 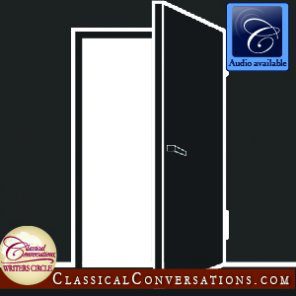 “What if he convinces himself to believe that those rascals did the right thing?”

“What if he actually tries the same thing himself?”

“What if he really doesn’t believe it, but by defending it he becomes some sort of sophist—a defender of evil?”

These are some of the questions parents might ask themselves when their child chooses to defend the “wrong side” of an argument in a persuasive essay. My wife and I were faced with this issue recently when our son chose to defend some less than savory fellows and their less than savory actions in a recent writing assignment for Challenge A.

After reading A Gathering of Days, my son, Calvin, chose to defend the actions of a group of boys who threw their teacher out of the school building. Following the form of his writing curriculum, he established his thesis as “The boys should have thrown the teacher out the door.” Not only did the boys’ actions in the story seem heinous, my son’s decision to defend their actions also seemed a little less than noble. However, Calvin is thirteen years old, so it should come as no surprise that he is intrigued by the extreme actions of his fictional teenage peers—the thought of committing such an act of educational liberation riveted him.

In the Lost Tools of Writing each successive essay adds one new component to the outline before the student begins to write the essay. Calvin will be writing Essay 6 in the Lost Tools of Writing, so in this essay he will add a refutation to his arrangement. In a refutation, the student considers “the other side of the story,” and asks himself the questions, “What would someone say in opposition to my thesis in order to prove me wrong? What is the strongest evidence they could use to support their opposition?”

After a student decides which proofs best support his opponent’s perspective, he must consider how he will refute them. He must ask, “How will I show that their opposition to my thesis is full of holes? Unsubstantiated? Has no warrant whatsoever? How do I defend myself against their attack?”

In order to explain this to Calvin, I used a tennis match as an example. His thesis and three supporting proofs are his serve to get the game going. His opponent develops a counter-thesis and hits the ball back across the net to him. Calvin then refutes the counter-thesis, which hits the ball back across to his opponent. His opponent states another counter-thesis and the ball is back in Calvin’s court, to which Calvin must develop a refutation in order to return the ball to his opponent. Although the pursuit of truth is not a game, the tennis match helped him to envision the back-and-forth of the refutation process.

If you, my dear reader, have never tried to include a refutation in a persuasive essay, you are really missing out on some fun, and my son made it even more fun by selecting a thesis that deserved to be refuted. As he created his refutation, he found that he kept coming up with good reasons why his original thesis was a bad idea. He discovered that his own experience soundly refuted his own proofs from his outline. We also found that the Bible refuted him soundly, his mother refuted him soundly, and he also discovered something else. He discovered that he needed to go back to the story to see if anything in the text helped him to defend these young vigilantes.

So, we went back to the story looking for details—circumstances that might help him make his case. What we found was that there were several questionable decisions made by many of the characters involved in the story; it is a rich story, ripe for discussion and refutation. As we read, we never found a rock-solid defense for his case, but we did come to know the circumstances and the relationships in the story much better than before we began working on the refutation.

As Calvin wrestled to complete his refutation, he took another step along the long, laborious path toward wisdom. In his immaturity, he still finds the boys’ expulsion of the teacher funny and exciting—something he would like to see happen every now and then, and in his ever-growing maturity as a young man, he knows deep down it wasn’t a good idea.

This was my son’s first brush with refutation. His ideas are those of a thirteen-year-old, and his thirteen-year-old vocabulary does not allow him to express those ideas very well. This paper will not be remembered as an eloquent defense of the teacher’s expulsion from the classroom, but this essay is important. It will go down in history as the first time I helped my son to complete a refutation in a persuasive essay. According to the plan, this is only the first of many refutations, and the first of many occasions when my son will think he is right until someone comes along to question him.

“The one who states his case first seems right until the other comes and examines him.” Proverbs 18:17 ESV