Homeschooling in the Desert of Affliction 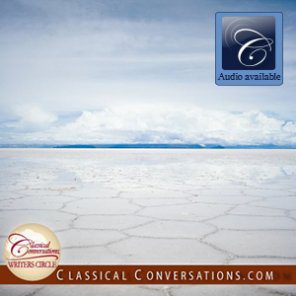 This school year God moved our home school into the desert. The breast cancer I thought I had successfully battled last school year spread, as triple-negative breast cancer is notorious for doing. As a result, I was forced to make adjustments to my homeschooling plans for the year again.

Though God placed me on a hot, dry, dusty, often steep and rocky path, He also gave me the perfect gift from a friend to help me on the journey—Walking with God in the Desert, the latest DVD in Ray Vander Laan’s series, “That The World May Know.” “In the desert, in times of pain and suffering, in times of difficulty and hardship…” Vander Laan’s Biblical teaching showed me that we learn to know, trust, and love God because we have nowhere else to go. Only God can provide for our needs in this place described by David in Psalm 63:1 as “a dry and weary land where there is no water.”

In early November, I discovered that the increasing pain in my left leg was caused by a tumor growing on my spine, putting pressure on the sciatic nerve. Tests showed that I also had a large mass on my liver and smaller tumors everywhere, though thankfully not in my brain! Radiation successfully shrank the tumor and eliminated the pain in my leg, but the culmination of the sciatica, radiation, chemotherapy, and then a cough and cold took its toll. I ended up in bed for a week, beginning the day after Thanksgiving, and I lost ten pounds. And I am only five feet and four inches tall!

During the weeks at the end of November and the beginning of December, I often lay awake at night for hours, weak and worried about nearly everything that came to mind. I was not just walking through the valley of the shadow of death; I was living there. However, as my physical strength slowly returned, so did my emotional and spiritual strength, and I found myself once again in the land of the living with hope for the future.

Though I was not afraid of death because of the certain hope of Heaven, the prospect of dying and the potential pain in the moments leading up to death, as well as the heartache of leaving my family behind were overwhelming at times. I had to take those thoughts captive; they were a hindrance, not a help. They provoked fear rather than inspiring faith. When I was tempted to dwell on death, a dear friend gave me this good advice, “You just cannot go there.” She reminded me of my simple yet important role of being present in the home during this time. I was still there for my family; I was just sick.

Science says that I have five years to live. Though I have had a good response from chemotherapy—the smaller tumors are gone and the mass on my liver has shrunk considerably—according to my doctor, eventually the current drug regimen will fail, the cancer will grow back, and I will have to be treated with other drugs. Thankfully, the doctor has a lot of drugs with which to work, and in two years new drugs that target cancer cells will be available. By then, other forms of treatment could be available to help extend my life. All this is apart from God, “…who is able to do immeasurably more than all we ask or imagine…” (Ephesians 3:20), and I continue to ask Him for healing.

Our homeschooling still needed to continue in the midst of my struggles. With my youngest daughter beginning her first year of high school, I carefully considered what changes to make in our approach to the school year. For many weeks the sciatica kept me from sitting comfortably, so we had already been conducting much of our studies from my bed. She worked a little more independently than my two older children in their high school years and she also spent a good deal of time practicing music. I continued with that plan, adjusting our routine as needed.

The second semester has been much brighter, as we can spend more time in our usual school setting in the living room or at the kitchen table. Enhancing our studies with good literature, we are supplementing biology with The Burgess Animal Book for Children and Fearfully and Wonderfully Made by Dr. Paul Brand and Philip Yancey. Our American history studies include some of my favorite books: Tom Sawyer, Cheaper by the Dozen, and To Kill a Mockingbird. It is a treat to read these books together, even on the days when I am tired or fuzzy-brained from chemotherapy. March and April will include an eight-week Toastmasters Youth Leadership Program, one of our favorite additions to homeschooling.

But by far the best addition to our homeschooling this year involved our whole family. In August, my two older children started attending the local community college as full-time students. It was a great comfort to have them home during this difficult time, still a close part of our family and homeschooling lifestyle, as they continued their studies in a different environment. I suggested that as a family we watch Walking with God in the Desert so we would have the same Biblical images to turn to whenever the desert moments of affliction became too hard to bear. Once a week, usually on Saturday evenings, we gathered to learn from Ray Vander Laan with lessons set in the cultural and geographical context of the Israeli deserts, the land of the ancestors of our faith. He repeatedly reminded us that God’s provision in the desert does not make the journey easier or even less painful, but it makes it possible.

We tend to think of the desert as a wide expanse, stretching for miles, but the deserts of Israel are often barren, rocky hills and mountains, sometimes with steep, narrow paths that do not allow the traveler to see very far ahead or behind. We have to trust God if we are going to survive in these conditions. When set in the desert, even familiar passages like the parable of the wise and foolish builders in Matthew take on new meaning. Rather than the sandy seashore, the sure foundation of the rocks in the desert mountains and hills are contrasted with the sands of the wadis, the desert valleys where dangerous floodwaters flow unexpectedly through narrow canyons.

Together our family learned that in the desert, in the unknown, God “…is always there and just enough.” He provides shade, not from a big oak tree by the Mississippi River like many of us picture, but from the sparse shade of the broom tree, “…your shade at your right hand…” (Psalm 121:5), that extends only about as far as our arms can be extended. Or He provides slightly more extensive shade and rest from trees planted by streams as described in Jeremiah 17 and Psalm 1, like the acacia tree, “the Bedouin’s best friend,” whose wood was used to make the Ark of the Covenant. God even provides green pastures in the desert but not the “belly-deep alfalfa” we normally envision; instead, He leads us to sporadic tufts of grass growing out of the rocks on the hillsides. Like desert sheep, we must depend on the Shepherd to lead us to the next pasture and to the next broom or acacia tree. We also learned about the deer and wild goats of the desert and their feet that enable them to move with ease across the steep rocks and narrow paths of the hills and mountains.

Life in the desert is hard. Vander Laan pointed out that we pray, rightly so, that God will make the path smoother, but we also need to pray for the right kind of feet. With the right feet, we can handle any path on which God places us.

One day when returning home from an errand, grateful for the renewed strength to be out and about but grieving the loss of my health, I lost heart. As I parked the car in the driveway I thought, “I cannot do this. God, why do You think I can do this?” With a sigh of remembrance, I recalled how quietly and effortlessly those wild goats moved on the rocks at En Gedi, the “Spring of the Wild Goats,” where David cut off the corner of Saul’s robe (1 Samuel 24). Hinds’ feet; I need hinds’ feet. As my tears flowed, I asked aloud, “Lord, please give me hinds’ feet.”

It is God who arms me with strength
and makes my way perfect.
He makes my feet like the feet of a deer;
he enables me to stand on the heights.