How Do We Study Science Classically? 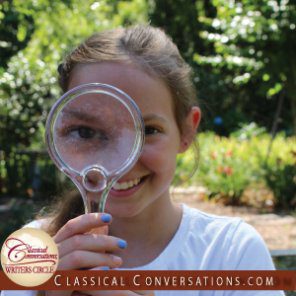 Below, dear reader, you will find notes, questions, observations, and hopefully, a few reasonable answers to the question, “How does one study science classically?” Instead of simply giving you a couple of answers from my readings and contemplations, I thought I would invite you into my invention—my search for what to say. I will be employing the Five Common Topics of Invention as my working model to uncover what studying science “classically” may look like.

“Classical,” in this context, is a word chosen to convey the idea that we are attempting to discover and implement an older mode of inquiry and teaching. Often this term implies a particular chronological period such as Ancient Greek, Ancient Roman, the Early Church, and the Middle Ages.  Sometimes “classical” refers to particular thinkers from those eras: Thales, Aristarchus, Archimedes, Ptolemy, Galen, Pope Sylvester II, or Jean Buridan.

We often forget, or simply do not know, that classical inquiry pursued knowledge from three perspectives: Natural, Moral, and Divine. We tend to think of the sciences in modern categories, implying that only the natural sciences (Natural Philosophy) produced scientists. We leave out those who inquired about human nature (Moral Philosophy) and the nature of both first and final causes, as well as theology proper (Divine Philosophy).

Often the “revolution” of Copernicus serves as a divide between classical and modern approaches. Sometimes the explicit, historical delineation of “The Scientific Method” serves to separate the two. We also understand that the change in the approach to inquiry is the fruit of man’s understanding of himself and the world around him. During this transition between classical and modern approaches to science, the facts didn’t change; they were, rather, reinterpreted.

This is a point that calls for a comparison between the two understandings of inquiry.

Comparison: How is the modern study of science similar to classical inquiry? How are the two different?

Similarities: When comparing modern science to classical inquiry, one finds several threads common to both. For example, the nature of mankind has not changed. No evolutionary theory, no matter how extreme, can pretend that Aristotle was a different type of thing than Einstein was. Or stated positively, all of us are sons of Adam and daughters of Eve. Whatever it is that is different about the classical and modern approaches to science, the nature of the one asking the questions is not a variable.

Also, the world being studied is the same chunk of rock: third one from the sun. The same number of elements still occur in nature. The seasons still occur in the same order. The speed of light is constant. There may be less Ozone, but it still behaves the same. Whatever gravity is, it still does the same thing: pull toward to center, and the list goes on.

Differences: If the nature of mankind and the nature of nature are both constant, what are the differences? Why are we even having this conversation?

Although man’s nature has not changed, modern man’s understanding of himself has been pressed into a box of utility and technology that drives all modern scientific pursuits. The ancients did not approach the purpose of science as modern scientists do. The ancients understood themselves as the highest earthly being: one to be conformed to an ideal pattern. Modern scientists view themselves as having equal, or lower, footing with everything else—no greater than “the strict sum of his physico-chemico parts”[i]—yet many also perceive themselves as working to make the world a better place. These improvements are supposedly based only on evidence gathered from experimentation, yet they inherently require a worldview by which one determines what is “good” or “better.”

The ancient man was seeking what he “ought” to do based on reality—the way things are. The modern scientist often assumes that he “ought” to do whatever technology “can” possibly accomplish. The ultimate goal is progress, which can never be reached.

Relationship: What caused the ancients to approach inquiry the way they did? What were the results? What caused modern science to develop the way it did?

The ancients, whether Christian or not, believed reality to be real, as odd as that may sound. To them, the cosmos was as it appeared, and man’s burden was to conform himself to the best possible life within that cosmos. This resulted in ancient “scientists” utilizing the tools of Logic—to make sense of what was there—and Mathematics—to measure what was there, rather than turning to experimentation in order to acquire what we know of as “scientific” knowledge. They saw both Logic and Math as stable and sure, while the earth was viewed as constantly changing and unstable—not the type of place one would go for “proof.”

Often, the birth of modern science is traced from the repositioning of the theoretical center of the universe from the earth (geocentricity) to the sun (heliocentricity). Interestingly enough, Copernicus accomplished this feat with no more technology than Ptolemy, who had established geocentrism 1400 years earlier.  Copernicus simply sought to “save the appearances,” or make sense of what he saw, in different areas than Ptolemy had sought it. It was not technology that caused this shift; it was a different set of governing questions about the existing data.

The philosophical shift in thinking occurs slightly later than Copernicus, during the lifetime of Galileo, and stems from men like Francis Bacon and Rene Descartes. Bacon asserted that the primary purpose of knowledge was power, which man would exercise over the world around him. Descartes’ project shifted man’s knowledge about the universe away from the objective world, to which men are to be conformed, towards a man-centered view of knowledge that trumps the cosmos as it appears. In Descartes’ famous maxim, “I think therefore I am,” mankind became the new “I am”—the ultimate determining factor in establishing truth.

Circumstance: Given the different approaches to inquiry—classical and modern, what is possible? What is impossible for each?

Ancient inquiry’s governing questions regarding man’s place within a fixed reality provoked him to “save the appearances,” or make sense of what he saw with theories that accounted for all observed phenomena. Once he had accomplished this logically and mathematically as mentioned above, he generally did not pursue further knowledge experimentally. This resulted in the slow development of Natural Philosophy, i.e. Science, but encouraged a strong and steady development of Moral and Divine Philosophies.

The classical man’s understanding of himself as governed, as well as governor, was the world into which Jesus Christ came. He showed us that man is not only “governed,” but also “loved.” Knowledge puffs up, but love covers a multitude of sins. Knowledge will pass away, but love endures forever. The “wisdom” that the ancients sought, though headed in the right direction, fell short of the fullness of knowledge that was revealed in Jesus Christ and his apostles. Man’s understanding of himself as both created and redeemed, as both governor and governed, shaped the West into the civilization that provided for and resulted in the growth in scientific inquiry over the past four hundred years.

But if all this wonderful technology is possible under modern science, what has become impossible? If man is merely a powerful shaper and governor of the world around him, how will he be governed? By brute force? By natural forces? By instinct?

Is it possible for mankind to aspire to any higher goals than just acquiring more gadgets? If so, how will we go about determining which goals are good and which are bad? How will we seek any goals higher than just the next one? Can we have ultimate goals? If they even exist, can we know them?

For all that has become possible through modern science, have you ever heard a modern stop to ask what has become impossible? If you have, what were their answers?

Testimony: What is the source of all our knowledge about the history of inquiry? What are this authority’s biases? Do those biases invalidate the argument? How do we distinguish between facts and biases?

As we compare classical science with modern science, we must constantly remind ourselves that all the information we have about either perspective, yea, about anything outside our personal experience, has come to us through another human being. Someone, somewhere, wrote something down or told it to someone else, who then wrote it down. We only know Aristotle, Copernicus, or Einstein existed because of written record—because someone told us they existed and did what they did.

A study of science will always be a study of history, which always involves men and women with personal biases, both known to them and often, unknown. History, collected and transmitted by people, always requires interpretation. This should not cause skepticism, as if we cannot know what “actually” happened; rather, it should provoke us to walk circumspectly, to hear both sides of a story, and to consider our own and others’ biases as we make a judgment. In short, it takes wisdom.

Too often we fall prey to the spirit of our age, which is to ascribe “factual” or “objective” knowledge to the sciences and “biased” or “subjective” knowledge to the humanities, such as history. Perhaps, starting today, we can begin to reorient our understanding of how knowledge is acquired and transmitted through our own reading and lead our children in better paths than we ourselves were led.

Closing Thoughts:  This article is not an essay; rather, it is the beginning of a dozen essays, and maybe even a couple books. In reading this, you have actually travelled with me through the sequence of questions and answers. I did not write the answers and then script the questions to match. I used the questions to collect, categorize, and catalogue my thoughts.

The Five Common Topics of Invention are not gimmicks, fads, or novelties; they are tools—tools that will fit the hands of anyone that picks them up. Tools that, with a little practice, anyone can use in order to more fully know himself, the world, and the God who made it all.