How to Read a Great Book 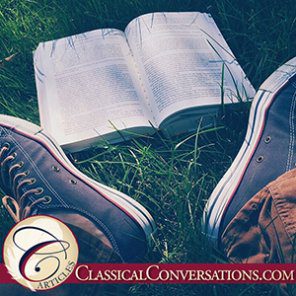 Before plays had acts and novels had chapters, people still had to figure out the form of the things they read.

In the ancient world, writers seem to have treated the structure of their writing as a game. They used it to hide meanings and to give the reader clues to find what was hidden. St. Luke, for example, who was the most classical of the New Testament writers in his forms (being a doctor he had received a classical education), assembles his vignettes from the life of Christ in a series of chiastic structures (ABCD DCBA) that provide hints about the message he is delivering. Then he ends each section with a summary statement that indicates it’s time for a new “chapter.”

As a result, the act of reading was by its nature a mental workout. The idea of reading something once and saying, “I read that,” was laughable. You had to try to figure out the outline/structure of the book, and doing so both taught you how to read and compelled you to read carefully and attentively. For this reason, chapters are one of the things that have made reading so easy that we don’t learn how to read any more.  In fact, we don’t even know how to teach reading anymore.

If you want to read a great book, you have to seek out its secrets and one of the best ways to do that is to look at its surface. Just notice the form and structure it incorporates.

Let me try to do this with Plato’s Gorgias, a book I’m reading as I prepare for the teacher apprenticeship program I lead. I begin by skimming the text with eye toward making simple observations. I don’t have to look hard, but I do have to look, to get some basic information. Please note that I’m not actually reading the text at this point and therefore I am not drawing any conclusions about the specific meaning of the structure. I’m noting it; that’s all.

Now, I can’t really prevent my eyes from reading the occasional line, but I’m doing my best to withhold judgment on the weight of what I read. Experience with an author does incline one to draw conclusions, but only tentative suggestions are valid at this point. Especially with a great book.

The first thing I observe, and this is important, is that the book is 80 pages long in the source document (or 42 pages in the Great Books set). Then I observe the following:

I have observed the basic structure of the book and that is enough work for one day. When I come back to the text next time, I’ll start looking for further clues. For example, I note that the story is called Gorgias, yet Gorgias himself hardly talks compared to Polus and Callicles. Even if later editors named this dialogue that has to be a meaningful fact. I want to know why that is.

Also, I notice that the section with Callicles begins and ends with longish statements (a few pages) sandwiching a long series of shorter statements and questions (questions and answers). So I ask, “Why?”

Throughout this dialogue, I’ll encounter all sorts of questions for which I won’t know the final answer. They’ll all interest me and drive me to thought. But if I ignore these surface observations and the questions they bring up, I’m quite certain I’ll miss the deeper insights to which the Gorgias (or any great book) is seeking to lead me.

Don’t try to read deeply first. Take a close look at the surface of things and the depth will take care of itself.

Buy Stanley Fish’s book: How to Write a Sentence: And How to Read One